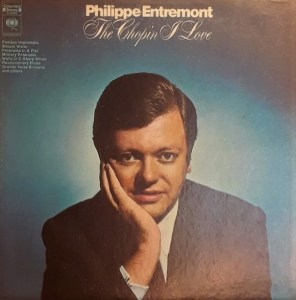 This is an undiscovered Columbia gem from 1971. Both musically and sonically this record is stunning. Who knew Columbia could record a piano this well? You could play fifty vintage piano recordings and not find one as good as this! We know, we’ve played plenty, including a number of Entremont’s Columbia records that don’t sound too good to us. Maybe we need to find a Hot Stamper of some of the weaker titles, but it hasn’t happened yet. A word of advice: avoid the piano concertos. We have yet to hear a good one. Those steely Columbia strings are far from our idea of good sound.

These solo piano pieces are performed with consummate skill and deep feeling by the legendary Philippe Entremont. His liner notes are beautifully written and insightful as well — well worth reading.

Fortunately this record has no strings, just a solid, clear piano in a big hall.

This vintage Columbia Masterworks pressing has the kind of Tubey Magical Midrange that modern records can barely BEGIN to reproduce. Folks, that sound is gone and it sure isn’t showing signs of coming back. If you love hearing INTO a recording, actually being able to “see” the performers, and feeling as if you are sitting in the studio with the band, this is the record for you. It’s what vintage all analog recordings are known for — this sound.

What We’re Listening For On The Chopin I Love

The Sound of the Piano

The piano sounds REAL. It’s clear and clean and solid the way a piano really sounds in recital. The transparency is simply amazing — you are there! There aren’t many solo piano recordings that sound this right. When you hear one it’s shocking how good it can be.

Note especially how percussive the piano is. There is no smear to be heard, the notes are sharp and clear, and that is quite unusual in our experience. This is the power and beauty of the real instrument played in an exceptionally good acoustic.

Warm and delicate, with dead on tonality, this is the sound we love.

Listen to how clearly you can hear the huge hall on the third piece on side one. Somebody knew what they were doing when it came time to record these lovely Chopin pieces.

Here at Better Records we have never been fans of Columbia classical LPs. Years ago we noted that:

Columbia classical recordings have a tendency to be shrill, upper-midrangy, glary and hard sounding. The upper mids are often nasally and pinched; the strings and brass will screech and blare at you in the worst possible way. If Columbia’s goal was to drive the audiophile classical music lover screaming from the room (or, more realistically, induce a strong desire to call it a day record-playing wise), most of the time one would have to grant they succeed brilliantly. Occasionally, however, they fail. When they do we call those pressings Hot Stampers.

To be clear, the fault more often than not has to be in the mastering, not the recording. We’ve raved about so many great copies of titles in the past, only to find that the next three or four LPs we pick up of the very same titles sound just godawful. There are some amazing Bernstein recordings out there but the amount of work it takes to find the one that sounds good is overwhelming — how can such great recordings be consistently mastered so poorly?