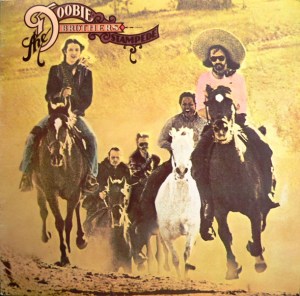 The average copy of this album is compressed and congested, recessed and veiled, grainy and thin; in other words, it sounds like an old Doobie Brothers album. It takes a copy like this one to show you just how good the Master Tape must be.

And if we hadn’t had plenty of copies to play with, we would never have found this one. END_OF_DOCUMENT_TOKEN_TO_BE_REPLACED

Trumpets, trombones, tubas, tambourines, big bass, drums — everything has the true tonality and the vibrancy of the real thing. The reason this record was such a big hit in its day because the recording engineers were able to capture that sound better than anybody else around. That’s also the reason this is a Must Own record today — the sound holds up!

Just listen to that amazing brass choir on Oh Lord, I’m On My Way. It just doesn’t get any better than that. If ever there was a Demo Disc, this is one! END_OF_DOCUMENT_TOKEN_TO_BE_REPLACED

Side one rates A++ to A+++ and side two is close behind at A++. A copy with grades like these gives you bigger, fuller, more open sound as well as more energy and presence. Importantly, there’s more separation between the various instruments here, a feature that really allows you to make sense of the music and appreciate everything that’s going on. This copy is more open and transparent than the typical pressing by a mile.

The first track on side two is a step down from the rest sonically, I’m afraid. And there are times on the album where you can hear some grit and distortion, but trust us — that’s on the tape, and any steps taken after the fact to remove it would rob the instruments of their natural texture. We all enjoy rich, smooth sound, but it’s not worth losing musical information. This record may not sound perfect, but it sounded right to our ears, and most copies just plain don’t. END_OF_DOCUMENT_TOKEN_TO_BE_REPLACED

END_OF_DOCUMENT_TOKEN_TO_BE_REPLACED

11S/ 10S are the best stampers for this amazing DEMONSTRATION QUALITY record!

I think that information still holds up. I can also tell you that 5S/5S has never impressed us much.

M-/ E+++. Side 1 plays nearly NM without a pop! Side 2 opens with a half inch scratch. But think about it — isn’t one side about the right amount for this kind of music? Do you really need to play side 2 after hearing side 1? This copy gives you a good portion of the music with AMAZINGLY GOOD SOUND.

What to Listen For on Classical Records END_OF_DOCUMENT_TOKEN_TO_BE_REPLACED

Fortunately for us audiophiles, this album catches him before the overly-processed, digital drums and digital echo “sound of the ’80s” had gotten into his blood. (Just play any of the awful Don Henley records he made to hear what we mean.) This record still sounds ANALOG, and even though it may be 1981 and mostly transistorized, the better copies display strong evidence of TUBES in the recording chain. END_OF_DOCUMENT_TOKEN_TO_BE_REPLACED

Reviews and Commentaries for Michel Legrand

This 2005 commentary discusses how easy it is to be fooled by tweaks that seem to offer more transparency and detail at the expense of weight and heft.

The brass on this wonderful Six Eye Mono pressing of the album set me straight. [Since that time I have not been able to find mono pressings that sounded as good as I remember this one sounding. That sh*t happens.]

I was playing this record today (5/24/05) after having made some changes in my stereo over the weekend, and I noticed some things didn’t sound quite right. Knowing that this is an exceptionally good sounding record, albeit a very challenging one, I started playing around with the stereo, trying to recapture the sound as I remembered it from the last copy that had come in a few months back.

As I tweaked and untweaked the system around this record I could hear immediately what was better and what was worse, what was more musical and what was more Hi-Fi. The track I was playing was Night In Tunisia, which has practically every brass instrument known to man, in every combination one can imagine. Since this is a Mono pressing I didn’t have to worry about silly issues like soundstaging, which can be very deceptive. I was concerned with tonality and the overall presentation of the various elements in the recording.

To make a long story short, I ended up undoing all the things that I had done to the system over the weekend! In other words, what improvements I thought I had made turned out not to be improvements at all. And this is the album that showed me the error of my ways.

But the one thing above all that is intolerable when trying to reproduce brass is a lack of weight or heft. There is nothing worse than thin sounding brass. It becomes hard, shrill, sour and altogether unpleasant. This is another reason why I don’t like small speakers: they have trouble reproducing the weight of brass instruments, in both jazz and classical music. END_OF_DOCUMENT_TOKEN_TO_BE_REPLACED

Let the Devolution begin! This is quite possibly the BEST COPY WE’VE EVER HEARD, and one of a very select group of copies (I can count ’em on one hand) to ever attain White Hot Stamper status here at Better Records. The sound here can be summed up in one word: HUGE! The bass is deep and punchy; the energy level is off the charts; the soundfield has tremendous depth and the music is just flyin’ out of the speakers. If you’re a fan of this music — and you should be — you’ll be hard pressed to find a copy that comes close to this one!

As soon as we dropped the needle we were shocked at incredible size and spaciousness here. We’re always waiting for those moments when the speakers disappear and the sound of an album goes to a level we’ve never heard before, and that’s exactly what this copy delivered. As Good As It Gets, White Hot Stamper material all the way.

While Devo’s music may never sound as rich, warm, and tubey as the typical classic rock album, that certainly doesn’t mean we need to accept completely anemic, sterile sound for this album. It took a big stack of copies, but here’s one that made us sit up straight, pay attention and enjoy. END_OF_DOCUMENT_TOKEN_TO_BE_REPLACED

This is a very nice looking MFP British Import LP. The vinyl this title was pressed on tends to be somewhat noisy so all the click ‘n’ pop counters out there should probably steer clear of this one as we cleaned and played ten copies (!) and not one was better than Mint Minus Minus!

But the sound tends to be quite good, which means that if you can stand a little surface noise you will be getting quite a bargain here. We love this music and think you will too.

It turns out that this album is simply The Best Of Procol Harum under a different name.

Why they would rename the album ‘A Salty Dog’ when there already is ‘A Salty Dog’ album, with different songs, is beyond me. But in a way I’m glad this is the Best Of Procol Harum, because many of their albums are full of filler, and this one is full of nothing but good songs. END_OF_DOCUMENT_TOKEN_TO_BE_REPLACED