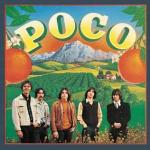 More of the Music of Poco

Poco’s second album is an unusual blend of country-rock, with some long, jazzy instrumental breaks that center around Rusty Young’s pedal steel, which doesn’t sound like any pedal steel guitar you’ve ever heard. It’s played with a wah-wah pedal and, if that wasn’t enough, the resulting sound is sent through a Leslie organ speaker.

We know it sounds crazy, but it really works. There is nothing else like it on record, nothing that we’ve ever heard anyway.

Most of side two is taken up by a single track, Nobody’s Fool / El Tonto de Nadie, Regresa. It’s a suite in which the band stretches out instrumentally in a somewhat proggy way, although one could make the case that Bluegrass music is all about “stretching out instrumentally.” END_OF_DOCUMENT_TOKEN_TO_BE_REPLACED