Most copies of this album sound like cardboard, especially the later pressings on the palm tree and tan labels. To get the best sound you need originals of this album, and Warner Brothers green label originals are getting pretty darn hard to find as more and more collectors and audiophiles are coming to the realization that the unending stream of heavy vinyl reissues flooding the market leaves a lot to be desired. (Our desire for them is at zero as we no longer bother to order the stuff.) END_OF_DOCUMENT_TOKEN_TO_BE_REPLACED

END_OF_DOCUMENT_TOKEN_TO_BE_REPLACED 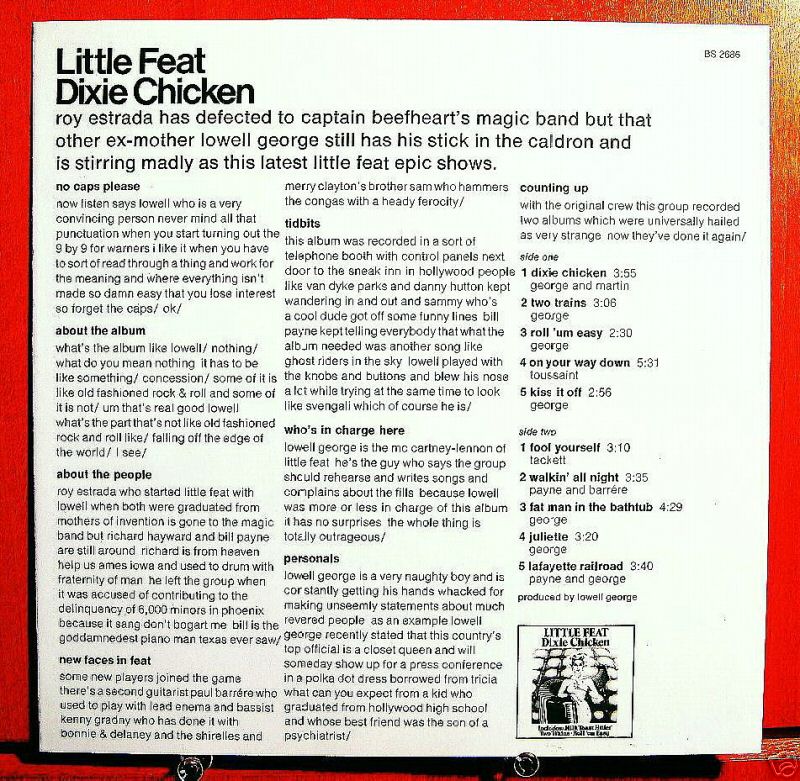 White Hot Stamper sound on side two — yes, it is possible, and this very copy is Proof with a capitol P. Most copies of this album sound like cardboard, especially the later pressings on the palm tree and tan labels. To get the best sound you need originals of this album, and Warner Brothers green label originals are getting pretty darn hard to find as more and more collectors and audiophiles are coming to the realization that the unending stream of heavy vinyl reissues flooding the market leaves a lot to be desired. (Our desire for them is at zero as we no longer bother to order the stuff.)

Folks, this is no demo disc by any means, but the later pressings strip away the two qualities that really make this music work and bring it to life: Tubey Magic and Big Bass. This side two has both in SPADES.

Listen to how breathy and transparent the chorus is on the first track. Now layer that sound on top of a fat and punchy bottom end and you have the formula for Little Feat Magic at its funky best. This is the sound they heard in the control room, of that I have no doubt, and it is all over this side two. No side of any copy we played was better.

This is A Triple Plus As Good As It Gets Little Feat Sound, the best we have ever heard for any of the early albums. END_OF_DOCUMENT_TOKEN_TO_BE_REPLACED

I have a theory about why MoFi’s mastering approach here tended to work for the album when it failed so miserably for so many others. It goes a little something like this.

Back in their early days MoFi tended to add bass and treble to practically every record they mastered, regardless of whether or not the master tape they were using needed any such boost. A little extra sparkle up top and a little extra slam down below was what the audiophile public seemed to want. Truth be told, I was a member of that group and I know I did.

Fortunately for them Waiting for Columbus is an album that can really use a little at both ends. Rarely did The Mastering Lab supply it, making the original domestic pressings somewhat bass-shy and dull up top. The MoFi clearly corrected the poor EQ choices The Mastering Lab had made for the most part.

But at what cost? At a very high one, revealed to us during our shootout by the killer pressings we uncovered. On the MoFi the bass, although there is more of it, just the right amount in fact, is BLUBBER. The lack of definition is positively painful, once you’ve heard how well-recorded it is, which is what the best copies can show you. END_OF_DOCUMENT_TOKEN_TO_BE_REPLACED The problem has always been an overly smooth top end, combined with congestion, smear, and a serious lack of presence. The good news is that if you clean enough copies with the advanced cleaning techniques we’ve developed, and you make enough improvements to your stereo, room, etc., with the right copy you can actually get this album to sound clear AND rich. END_OF_DOCUMENT_TOKEN_TO_BE_REPLACED 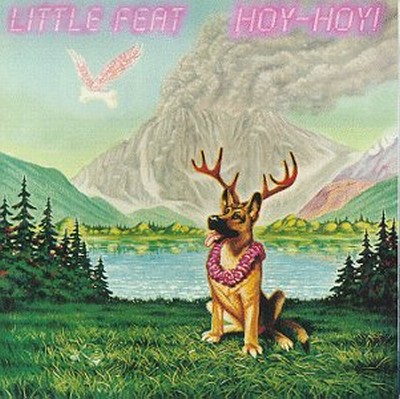 Another in our series of Home Audio Exercises with advice on What to Listen For (WTLF) as you critically evaluate your copy of Hoy-Hoy.

Side four has a live version of the song Two Trains, another one of their best recordings, followed by China White, the story of Lowell’s feelings toward cocaine. Dead at 33, rock and roll lost a giant when drugs brought him low. END_OF_DOCUMENT_TOKEN_TO_BE_REPLACED

This kind of recording quality was abandoned decades ago, but there was a time — I’m old, I remember it — when engineers actually tried to produce recordings with this kind of rich, sweet, thoroughly analog sound. 1979, the year of this album’s release, is right at the tail end of it. Why do you think so much of our Hot Stamper output covers the decade that stretched from the late ’60s to the late ’70s? Only one reason — that’s where some of the best sound can be found. (It’s a bit like Willie Sutton’s famous answer to why he robbed banks: “because that’s where the money is”.)

Which is taking the long way round in saying that this recording has a healthy dose of analog Tubey Magic, in places maybe even a bit too much, as the sound can sometimes get too thick and overly rich, like a cake with too much frosting.

The best copies keep that wonderful analog smoothness and freedom from artificiality, adding to it the life and energy of classic rock and roll. Yes, you can have it all — rich analog sound that jumps out of the speakers! Just listen to those horns on Honest Man — that is the sound we are looking for on an album like this. END_OF_DOCUMENT_TOKEN_TO_BE_REPLACED

This is an amazingly well-recorded concert, and what’s more, the versions the band does of their earlier material are much better than the studio album versions of those same songs in every case.

Fat Man In A Bathtub on this album is out of this world, but you could easily say that about a dozen or more of the tracks on this double album. Which simply means that you will have a very hard time listening to any of the studio versions of these songs once you’ve heard them performed with the kind of energy, enthusiasm and technical virtuosity Little Feat brought to this live show. (I saw them twice with Lowell and they were amazing both times.) END_OF_DOCUMENT_TOKEN_TO_BE_REPLACED

It may contain only a handful of tracks from the album, but folks, STUNNING SOUND doesn’t BEGIN to do justice to this EP. I would state categorically that there is not a single rock record on the TAS List that can hold a candle to it in terms of live-rock-in-your-living room blasting power. This is one of the most AMAZING DEMO DISCS of All Time. If it were an album I would put it on a Top Ten Best Sounding Rock and Pop List (if we had such a thing).

This EP may only hold four songs, but each is a Demo Disc Track of the highest order: Gringo (edited version) and Over The Edge for side one; Teenage Nervous Breakdown and Rock and Roll Doctor for side two. END_OF_DOCUMENT_TOKEN_TO_BE_REPLACED

But who knows? We could find something even better down the road. That’s what shootouts are for. END_OF_DOCUMENT_TOKEN_TO_BE_REPLACED