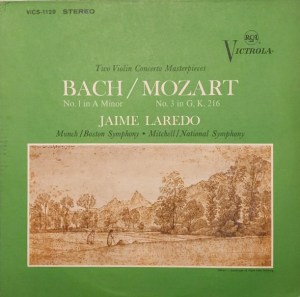 This original plum label Victrola pressing from 1965 has SUPERB sound on both sides. The Bach piece is a rich tapestry of strings spread across the stage and clearly separated left to right. There’s not much depth but that seems of little consequence; all the instruments are heard in their proper space and location. The tonality is right on the money throughout.

The Mozart concerto starts out sounding a bit opaque, but about an inch or so into the side it opens up wonderfully, with sweet, spacious, natural sound from there on out. Jaime Laredo plays both works superbly, and the Living Stereo quality sound brings his playing to life in a way that few recordings can.

Although never released as a real LSC, this Victrola pressing is every bit the equal of most of the better Living Stereo pressings. END_OF_DOCUMENT_TOKEN_TO_BE_REPLACED The piano is beautifully recorded as well. Geza Anda’s performance is hard to fault here. You will have a very hard time finding better recordings of these Mozart piano concertos, of that we have no doubt. END_OF_DOCUMENT_TOKEN_TO_BE_REPLACED 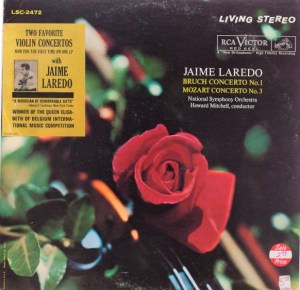 Many years ago we wrote the following review for LSC 2472:

Superb sound. The violin is wonderful on both sides. The Mozart is absolutely gorgeous; the best I’ve ever heard it.

The orchestra on the Bruch side gets a little congested in the louder passages, which is typical for records of this era.

Laredo plays these pieces beautifully. The Bruch is an especially romantic work and his violin sings sweetly and with deep emotion throughout. The Mozart is more spritely and he plays it with the light touch it requires. You will have a hard time finding a better violin concerto record. This ranks with the best of them.

More recently we got in a nice 1S/1S pressing that sounded thick and dark, even after a good cleaning.

Were we wrong years ago? Hard to say. That copy from many years ago is gone.

Three things we always keep in mind when a pressing doesn’t sound like we remember it did, or think it should:

All things considered, the consensus would now be that LSC 2472 is very unlikely to be as good a record as we used to think it was.

A classic case of Live and Learn and also a case of Progress in Audio, probably.

END_OF_DOCUMENT_TOKEN_TO_BE_REPLACED

This is a 180g Classic LP with very good sound, the best of the violin concertos Classic has released to date and one of the best Classic classical titles ever.

This is one of the early 180 pressings which tend to be quieter than the later 200 gram pressings.

Original pressings of this late Heifetz/Hendl/CSO performance tend to be edgy, which has been remedied on this reissue through cutting directly from the three-track masters by Bernie Grundman. Grundman has also tuned the balance between Heifetz and the Orchestra to better integrate the phenomenal bowing and intonation that Heifetz is famous for with the power of the Chicago Symphony. Another 10++ performance and recording – not to be missed! – Liner Notes END_OF_DOCUMENT_TOKEN_TO_BE_REPLACED

INSANELY GOOD vintage Decca sound from 1958 — bigger, richer and more Tubey Magical than 9 out of 10 (or more!) records we’ve ever played from the pre-’60s early stereo Golden Age. How they got this one so right is beyond me. We were sorely tempted to grade it White Hot, but chose instead to err on the side of modesty and call it A++ to A+++ or better (which is practically White Hot when you think about it).

Can it be that THIS was the first stereophonic sound music lovers of the world were exposed to on LP? (Stereo tapes may have existed in 1954, but they had to wait until 1958 to be transferred to vinyl.) Could we possibly have fallen so far in only fifty years? Judging by the quality of the sound on this copy — dramatically better than others we’ve played, and quieter too — the answer can only be a resounding yes. If you like your sound BIG and LUSH, this record is guaranteed to blow your mind.

Rather surprisingly there is a Heavy Vinyl import reissue of this album available, at a cost of $50, not cheap by any means and undoubtedly a pale shadow of this London Blueback LP. There is simply no chance in the world that a recording of this fidelity could be mastered and pressed properly these days — we sure haven’t heard one, and we’ve played them by the hundreds. We implore anyone who made the mistake of buying such a modern record to pick this one up and hear what they couldn’t possibly know they were missing, but is nevertheless clearly audible on this very pressing for all to enjoy. END_OF_DOCUMENT_TOKEN_TO_BE_REPLACED

Super Hot Stamper sound on side two of this Shaded Dog pressing, which is the side with Mozart’s Symphonie Concertante for violin and viola. The sound is wonderful, with lovely 1964 RCA Living Stereo Tubey Magic, presenting the violin solidly with spot-on timbre.

Side one, the Glazounov, earned a nearly-as-good sonic grade of A+ to A++. The violin on this side is full-bodied and present just the way we like it.

A++, the body of the violin is reproduced here especially well, along with the rosiny texture of the strings. This side is a bit smooth and dark compared to the best we played, so we are calling it Super Hot. Its faults are few, its strengths many.

A+ to A++. The orchestra is rich, but there is some Old School smear to the strings and an Old School lack of top end. Overall the sound is quite good within these limitations. END_OF_DOCUMENT_TOKEN_TO_BE_REPLACED

Full brass; full, rich, tonally correct strings; smooth higher up, never screechy — what’s not to like? It was the best side one we heard all day.

END_OF_DOCUMENT_TOKEN_TO_BE_REPLACED

A fairly good Speakers Corner Decca. They released this title on Heavy Vinyl in 1998; it was one of the few Speakers Corner classical recordings we used to carry and recommend.  It of course has the usual shortcomings.

Below are some thoughts from a recent classical listing that we hope will shed some light on our longstanding aversion to the sound of modern remasterings. The Heavy Vinyl Scorecard in our Commentary sections has a great deal more on the subject as well.

This original pressing has the kind of Tubey Magical Midrange that modern records cannot even BEGIN to reproduce. Folks, that sound is gone and it sure isn’t showing signs of coming back. If you love hearing INTO a recording, actually being able to “see” the performers, and feeling as if you are sitting in a real concert hall, this is the record for you. It’s what Golden Age Recordings are known for — this sound.

If you exclusively play modern repressings of vintage recordings, I can say without fear of contradiction that you have never heard this kind of sound on vinyl. Old records have it — not often, and certainly not always — but new records do not, ever.

Once you hear this Hot Stamper pressing, those 180 gram records you own may never sound right to you again. They sure don’t sound right to us, but we are in the enviable position of being able to play the best properly-cleaned older pressings (reissues included) side by side with the newer ones. This allows the faults of the current reissues to become much more recognizable, to the point of actually being quite obvious. When you can hear the different pressings that way, head to head, there really is no comparison. END_OF_DOCUMENT_TOKEN_TO_BE_REPLACED

The Mozart is wonderful. It blows away my first pressing, flat edge hard board copy that I had heretofore revered. Love it. A brilliant recording.

Glad to hear it! We sold our original close to ten years ago so it’s good to know this pressing can beat it. Those originals are hard to find; haven’t seen a clean copy since.