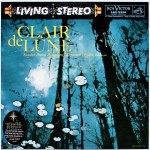 More Records with Side to Side Differences

This Shaded Dog LP has DEMONSTRATION QUALITY SOUND, if what you’re demonstrating is not a Hi-Fi spectacular, but rather a sublime presentation of an exceptionally sweet and natural string section in an orchestra, presented here on analog disc pressed more than sixty years ago.

Even though the album was recorded by Decca, it’s a superb example of Living Stereo Tubey Magic at its best. There will never be a reissue of this record that even remotely captures the space, transparency, sweetness and richness of the sound here.

A++ to A+++ or better! Without more copies in hand it’s hard to know how good the sound can get, but we found it Hard To Fault (HTF).

This side has more extension up top and down low and more texture to the strings.

A++, although it starts out a bit weaker than that and only really gets good a few minutes into the side. (We hear this effect fairly often on the records we play. Noticing things like this is what we do for a living.)

There is some smear and it is slightly opaque as well.

You will hear what we mean when you flip it over and those two problems disappear. 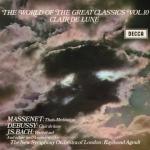 The music is superb on this side. One could play this record every day for a month and never tire of it.

Performed by the London Proms Symphony under the direction of Raymond Agoult. This performance also includes works by Massenet, Faure, Bach, Tchaikovsky and Gluck.

The record you see to your left is a budget reissue produced by Decca in 1970 of the same recording, and on the best pressings it too can sound amazing.

If you’re a fan of classical music, this RCA from 1959 belongs in your collection. The complete list of titles from 1959 that we’ve reviewed to date can be found here. 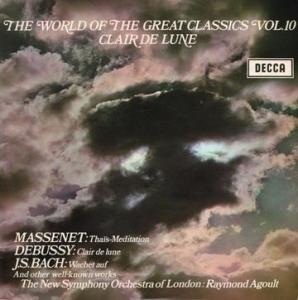 These sides are incredibly rich, sweet and full-bodied yet still very clean, clear and spacious; Demo Disc sound throughout!

This is the exact same recording as the famous Living Stereo Clair De Lune, LSC-2326, but with a couple of extra tracks included

Transparent and spacious, wide and naturally staged, clean yet rich, with zero coloration, there is nothing here to fault. Nearly Triple Plus all the way. So relaxed and natural you will soon find yourself lost in the music. END_OF_DOCUMENT_TOKEN_TO_BE_REPLACED