This Hot Stamper copy of Touch is one of the best sounding records Mobile Fidelity ever made, and the only record of theirs I know of that can’t be beaten by a standard real-time mastered pressing.

We’re talking Demo Disc quality sound here. The spaciousness of the studio and the three-dimensional placement of the myriad percussion instruments and bells within its walls make this something of an audiophile spectacular of a different kind — dreamy and intensely emotional.

Shocking as it may be, Mobile Fidelity, maker of some of the worst sounding records in the history of audio, is truly the king on this title.

Klemmer says pure emotion is what inspired the album’s creation. Whatever he tapped into to find the source of that inspiration he really hit paydirt with Touch. It’s the heaviest smooth jazz ever recorded. Musically and sonically, this is the pinnacle of Klemmer’s smooth jazz body of work. I know of none better. (If you want to hear him play more straight-ahead jazz try Straight from the Heart on Nautilus.) END_OF_DOCUMENT_TOKEN_TO_BE_REPLACED

Roger is up to his old tricks again, doing shootouts with our Hot Stampers and all the great pressings he already owns, in this case putting our humble Brown Label A&M domestic LP up against the legendary Pink Label Island British Import and a couple of MoFis. We’ll let Roger tell his own story, since by now we all know he does it as well as anyone.

Just a note on another hot stamper shootout I recently did, this time on Cat Stevens Tea for the Tillerman. It was interesting comparing itto the regular MFSL half-speed, the MFSL UHQR pressing, and a UK Pink Island 3U pressing, which was my all-time champ.

Sometimes I wish I kept my old crappy stereo to see if I could now tell what it was that made these audiophile pressings so attractive then. END_OF_DOCUMENT_TOKEN_TO_BE_REPLACED

Roger, you seem to be using the phrase “tonally lean” unpejoratively (if I can make up such a word), whereas for us here at Better Records, that is the kiss of death for Half-Speeds, and in fact Audiophile Records of All Kinds. Lack of weight down below, lack of Whomp Factor, is the main reason half-speed mastered records are so consistently and ridiculously bad. If not bad, certainly wrong. You can be very sure that Boston would not want, nor would they put up with, that kind of anemic sound for a minute. END_OF_DOCUMENT_TOKEN_TO_BE_REPLACED

It’s been a long time coming but we’re pretty sure whoever takes this bad boy home will agree that it’s been worth the wait. Here’s the first White Hot Stamper of The Chairman’s classic Nice ‘n’ Easy to ever hit the site! This killer pressing has an A+++ side one, an A++ side two, and unusually quiet vinyl throughout. Take this one home and play it against the MoFi pressing for a good laugh — this thing will positively SMOKE whatever other version you might have in your collection, guaranteed.

Definitely one of the most fun Sinatra albums, especially when it sounds like this!

It’s tough to find great sound for this album — most copies are pretty mediocre and the MoFi is godawful. That piece of garbage gets Frank’s voice completely wrong, thinning it out and boosting it at the top of his range. No one else besides MoFi ever managed to make Frank Sinatra’s voice sound this way, so what are the chances that they’re right and everybody else is wrong? END_OF_DOCUMENT_TOKEN_TO_BE_REPLACED

If you made the mistake of buying the atrocious Anadisq pressing MoFi put out in the ’90s, our Hot Stamper pressings will let you hear what a wonderful recording Val Valentin cooked up with these cats back in the day. END_OF_DOCUMENT_TOKEN_TO_BE_REPLACED Awful music, awful sound. This is the record that convinced me that MoFi would not hesitate to remaster records that have no actual musical or sonic value.

And that spending $20 to find out if an album is any good is an expensive way to learn more about music you may not be familiar with.

As curators they were generally good, but in cases such as this one, they failed miserably. END_OF_DOCUMENT_TOKEN_TO_BE_REPLACED

But why do some audiophiles listen to poorly recorded junk like Patricia Barber and Diana Krall? Their recordings are DRENCHED in digital reverb. Who is his right mind wants to hear the sound of digital reverb?

Rickie Lee Jones may not be my favorite female vocal of all time, but at least you can make the case for it as a Well Recorded Vocal Album. It’s worlds better than anything either of the above-mentioned artists have ever done.

The MoFi pressing of Alison Krauss (5276) is a disaster in the vocal department too.

Audiophiles for some reason never seem to notice how bad she sounds on that record. Can’t make sense of it. Any of the good Sergio Mendes records will show you female vocals that practically have no equal. Our best Hot Stampers bring the exquisite vocal harmonies of Lani Hall (aka Mrs. Herb Alpert) and Janis Hansen right into your living room. Why bother with trash like this Mobile Fidelity?

This is the record you bothered to take a photo of and post next to your front end? Something is wrong somewhere.

Holy F*CK. Just arrived. Absolutely fantastic! All I can say is wow.

Can you believe people take that mediocre MoFi seriously? It’s a joke next to the real thing, as you now know first hand.

And how much better is the +++ version (when they appear)?

We just sold a top copy last month, pricey (!) but hearing the record go to another level is a thrill that’s hard to put a price on.

We’ve been trying to find killer copies of Night Moves for ages but it is not easy. Most copies out there are thin and dry, which is no way to hear these classic ’70s tracks. We brought in copy after copy that made us think, “I swear this sounds better on the radio!”

Finally, after pulling together a ton of copies from different eras, we started to realize that there were indeed vinyl pressings of Night Moves that sounded right… but they are few and far between, the exception and not the rule so to speak. Here’s a copy with an excellent side one and a killer side two — the first Hot copy of a Bob Seger album to EVER hit the site.

Mobile Fidelity did a version of this album that was so bright we found it not just hard to enjoy but actually hard to listen to. The typical domestic pressing ain’t much better but I’ll take boring, dry sound over the aggressive MoFi approach any day. END_OF_DOCUMENT_TOKEN_TO_BE_REPLACED 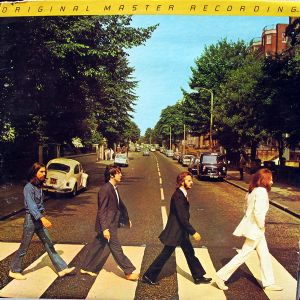 I’ve come to realize that this is a Key Track for side two, because what it shows you is whether the midrange of your pressing — or your system — is correct. At the beginning Paul’s voice is naked, front and center, before the strings come in. Most Mobile Fidelity pressings, as good as they can be, are not tonally correct in the middle of the midrange. The middle of the voice is a little sucked out and the top of the voice is a little boosted. It’s really hard to notice this fact unless one plays a good British pressing side by side with the MoFi. Then the typical MoFi EQ anomaly become obvious. It may add some texture to the strings, but the song is not about the strings. END_OF_DOCUMENT_TOKEN_TO_BE_REPLACED