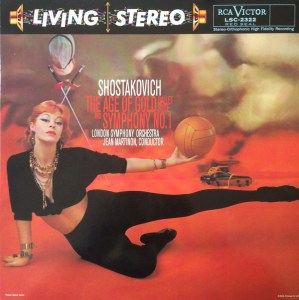 If you’re after the best sound, it’s the rare record that will have it, which makes clearing shelf space a lot easier than you might imagine. If you keep more than one out of ten you’re probably setting the bar too low, if our experience is any guide.

If you want nothing but amazing sounding classical records, we typically have quite a selection.

END_OF_DOCUMENT_TOKEN_TO_BE_REPLACED

Classic Records did a passable job with LSC 2449, one of their better efforts, but of course it has almost none of the sweetness, richness and ambience that the best RCA pressings have, and they have them more often than not in abundance.

Their version is not awful, like most of the classical recordings they remastered, and considering that the original goes for many, many hundreds of dollars, might be worth picking up at a reasonable price.

Most audiophiles (including audiophile record reviewers) have never heard a classical recording of the quality of a good original. If they had Classic Records would have gone out of business immediately after producing their first three Living Stereo titles, all of which were dreadful and labeled as such by us way back in 1994 as soon as we had a chance to play them.

END_OF_DOCUMENT_TOKEN_TO_BE_REPLACED

The Classic pressing of this album does not present the listener with the sound of a real, wood instrument bowed by horsehair in physical space.

The Classic of LSC 2222 is all but unlistenable on a highly resolving, properly set-up hi-fidelity system.

The opacity, transient smear and loss of harmonic information and ambience found on Classic’s pressing was enough to drive us right up the wall. Who can sit through a record that sounds like that? Way back in 1994, long before we had anything like the system we do now, we were finding fault with the “Classic Records Sound” and said as much in our catalogs.

With each passing year — 26 and counting — we like that sound less.  The Classic may be on Harry’s TAS list — sad but true — but that certainly has no bearing on the fact that it’s not a very good record.

END_OF_DOCUMENT_TOKEN_TO_BE_REPLACED

This is a 180g Classic LP with very good sound, the best of the violin concertos Classic has released to date and one of the best Classic classical titles ever.

This is one of the early 180 pressings which tend to be quieter than the later 200 gram pressings.

Original pressings of this late Heifetz/Hendl/CSO performance tend to be edgy, which has been remedied on this reissue through cutting directly from the three-track masters by Bernie Grundman. Grundman has also tuned the balance between Heifetz and the Orchestra to better integrate the phenomenal bowing and intonation that Heifetz is famous for with the power of the Chicago Symphony. Another 10++ performance and recording – not to be missed! – Liner Notes

What do you get with Hot Stampers compared to the Classic Heavy Vinyl reissue? Dramatically more warmth, sweetness, delicacy, transparency, space, energy, size, naturalness (no boost on the top end or the bottom, a common failing of anything on Classic); in other words, the kind of difference you almost ALWAYS get comparing the best vintage pressings with their modern remastered counterparts, in our experience anyway. END_OF_DOCUMENT_TOKEN_TO_BE_REPLACED

When Classic Records was blowing out it’s unsold inventory through the Tower Records Classical Annex in Hollywood, this was a title you could pick up for under ten bucks. I remember it being $7, but my memory may not be correct.

If you own this record, my guess is it is MINT. If you played it at all, you played it once and put it away on a shelf where it sits to this very day.

A Classic Records pressing (Remember the Sound!) that never sounded much good to me. But the original never impressed either, as you can see from our review of it.

I have never heard a copy of this record sound better than decent. This title is very unlikely to have the wonderful sound of the best Living Stereo pressings that you can find on our site, each of which has been carefully evaluated to the highest standards.

We love the Starker recordings on Mercury. Wish we could afford to buy some and do a shootout. At the prices they command these days, that is very unlikely to happen. END_OF_DOCUMENT_TOKEN_TO_BE_REPLACED

The standard Classic Records failings are as obvious and as irritating on this remaster as they are on practically all of the others.

The Bottom line: This is not a good sounding record.

It should go without saying that the real Mercury pressing is none of these things.

It has long been our judgment that Classic Records made very few good records. Why should this one be any different?

These Mercury releases apparently fooled a lot of audiophiles though.  Allow me to quote a writer with his own website devoted to explaining and judging classical recordings of all kinds. His initials are A.S. for those of you who have been to his site.

Classic Records Reissues (both 33 and 45 RPM) – These are, by far, the best sounding Mercury pressings. Unfortunately, only six records were ever released by Classic. Three of them (Ravel, Prokofiev and Stravinsky) are among the very finest sounding records ever made by anyone. Every audiophile (with a turntable) should have these “big three.”

Obviously we could not disagree more. I’ve played all six of the Classic Mercurys. The Ravel and Prokofiev titles are actually even worse than the Stravinsky we reviewed here on the blog.

END_OF_DOCUMENT_TOKEN_TO_BE_REPLACED

Keep in mind the Shaded Dog originals of this recording are awful too, as we make clear below.

We’ve played at least three Shaded Dogs of LSC 1901 since 2011 and all three were AWFUL.

A recent reissue showed us the light.

This copy is cut clean, its dynamics intact, which just goes to show how much better the master tape must be than we’ve been led to believe by the original Shady Dogs and the hacks at Classic Records (note: their heavy vinyl reissue is awful). END_OF_DOCUMENT_TOKEN_TO_BE_REPLACED