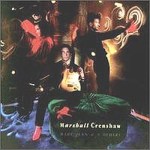 More Masterpieces of Rock and Pop

This is my favorite roots rock record of all time. I love the album and have played it many, many hundreds of times. It starts off with the driving This Is Easy and never lets up until the very last song, a beautiful ballad, They Never Will Know.

The All Music Guide had this to say about MC’s first 3 albums: “…an irresistible combination of masterful pop and vibrant, timeless rock & roll.” They weren’t that impressed with this album, but I cannot for the life of me understand why.

I think this is the album where Marshall got it all together: his best songs, his best production, his most tightly knit band, his best guitar solos — the best the guy had to offer is right here.

How does somebody play the same record 100’s of times? I have it on tape in my car, backed with one of my favorite Bonnie Raitt albums, Nine Lives. I can sing along with every song and know every guitar lick by heart. This music may sound simple on the surface, but it has the essence of great popular music. The songs are both heartfelt and catchy, with the kinds of hooks that remind me of the early Beatles.

If you like Buddy Holly, or any of the people that have been influenced by him to produce straight ahead rock and roll, you should like this.

If you have the kind of “delicate” stereo that can’t play loud, hasn’t much bass, or can’t move much air, this is not the record for you. This record is supposed to ROCK. If you don’t have a big system that can do that, you’re wasting your time trying to get this record to do what it wants to do.

It’s not a particularly good sounding record, which is why you have never seen a Hot Stamper pressing of it on our site. But the music is so good we think you can get past the sound and just enjoy the songs for what they are: great.

These songs may seem simple on the surface, but they are heartfelt and catchy, the essence of great popular music. If you like Buddy Holly (and who doesn’t like Buddy Holly?), or any of the people that have been influenced by him to make straight ahead rock and roll, you should find much to like here.

Marshall credits Rockpile and Squeeze as influences on this album. Since I like both those bands, especially Squeeze, this music is right up my alley.

Less grit – smoother and sweeter sound, something that is not easy to come by on the man’s debut.

More bass and tighter bass. This is fundamentally a pure rock record. It needs weight down low to rock the way the engineers wanted it to. END_OF_DOCUMENT_TOKEN_TO_BE_REPLACED