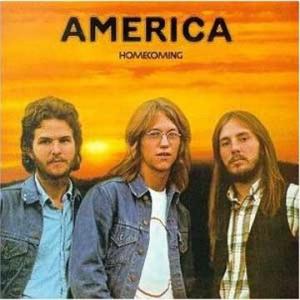 The guitars on this record are a true test of stereo reproduction quality. Most of the pressings of this record do not get the guitars to sound right. And when the guitars are perfection, the voices and all the other instruments tend to be right as well.

Let’s face it: they just don’t know how to make acoustic guitars sound like this anymore. You have to go back to 49 year old records like this one to find that sound. END_OF_DOCUMENT_TOKEN_TO_BE_REPLACED

This is clearly America’s best album, and on the better pressings like this one, the sound is worthy of Demo Disc status. You’ll find the kind of immediacy, richness and harmonic texture that not many records (and even fewer CDs) are capable of reproducing.

The version we are offering here has the song A Horse With No Name. Some copies without that song can sound very good as well, but with grades this good, this copy is going to be very hard to beat.

Interestingly, A Horse With No Name never sounds quite as good as the rest of the album. It was recorded in 1971, after the album had already been released, and subsequently added to newer pressings starting in 1972. Unlike the rest of the album, it was not engineered by Ken Scott at Trident, but by a different engineer at Morgan Studios. The engineer of that song took a different approach to the one that Scott had, and we leave it to you to decide how well that approach worked.

END_OF_DOCUMENT_TOKEN_TO_BE_REPLACED

I received the new copy of America last night. I have been listening to this record for exactly 50 years and I have never heard it sound like this! That big sound and tubey magic is there in abundance, the guitars sound like real guitars, the “jawbone” on Donkey Jaw vibrates forever, and the surface is amazingly quiet as well.

I know that 2020 was hard for everyone, and those of us who spent the year trying to cure kids of cancer while keeping them from catching and dying from COVID had a particularly hard time. I do not know if I would have made it through 2020 without the records that you guys sent me. It was a great stress relief to come home at night, put on one of my “Better Records”, and be transported back to a simpler time. Thank you for all that you and the entire team at Better Records do for us. END_OF_DOCUMENT_TOKEN_TO_BE_REPLACED

END_OF_DOCUMENT_TOKEN_TO_BE_REPLACED

I want to tell you I bought America’s 1st lp from you some couple of years back. White Hot designation at that time. I don’t know if you have found one better since then. Paid big dollars and I still cannot believe the sound. Worth every penny. When I play that LP, I cannot avoid getting goose bumps or getting totally enveloped with the music. The guitars and vocals are flat out surreal. It is just as amazing as the Eagles 1st lp Hot Stamper. Un******believable that any record could sound that good.

THE BIG SOUND on both sides lets this Greatest Hits compilation hold its own against the originals. They have plenty of bottom end that drives these songs with energy and life. Listen for the bells on ‘Tin Man’; they have the correct transients and harmonics. You never quite get back all of the tubey magic of the originals, but the detail and richness are enough to make you fall in love with this high quality George Martin (re) production.

Is That A Master Tape In Your Pocket… ?

If we didn’t know better we’d say this had Master Tape Sound, something we wouldn’t normally say about a compilation album. But wait just a minute — it IS Master Tape Sound! George Martin remixed the original multitracks, creating a new master mix in the process. The double tracked vocals on ‘Ventura Highway’ are an obvious indicator of the difference between this and the original. END_OF_DOCUMENT_TOKEN_TO_BE_REPLACED

The guitars on this record are a true test of stereo fidelity. As it says below, most of the pressings of this record do not get the guitars to sound right. They often sound veiled and dull, and on a copy with a bit too much top end they will have an unnatural hi-fi-ish sparkle.

(This kind of sparkle can be heard on practically every record Mobile Fidelity made in the ’70s and ’80s. Tea for the Tillerman, Sundown, Year of the Cat, Finger Paintings, Byrd at the Gate, Quarter Moon in a 10 Cent Town — the list would be very long indeed, and these are just the records with prominent acoustic guitars!)

The key song on side one that we use to test is Three Roses. There are three sonically-separated individuals each playing six string acoustic guitars, and when this side is cut right the guitars sound just gorgeous: sweet, with all their harmonic structures intact. (It’s also my favorite song on side one.) END_OF_DOCUMENT_TOKEN_TO_BE_REPLACED