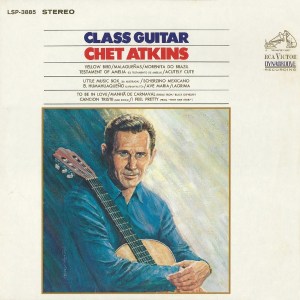 This RCA original pressing from Nashville, circa 1967, has DEMO DISC quality sound from start to finish, first note to last. Class Guitar is more or less a solo session from 1967, concentrating mostly on classical guitar pieces, with a few pop and jazz hits of the day thrown in for the sake of variety. Chet’s good buddy and main man Jerry Reed joins him on rhythm guitar on some tracks.

Both sides have plenty to offer the discriminating audiophile, with the spaciousness, clarity, tonality and freedom from artificiality that are the hallmark of the best Living Stereo recordings.

Truth be told, technically this is not a real Living Stereo record. It’s an RCA Stereo record. It has the Bill Porter Tubey Magic of the Chet Atkins albums we all know and love, the bulk of which we’re familiar with through our critical listening shootouts. (We’d love to do more but where are the clean stereo copies?)

In fact, not only is this record not a Living Stereo, it’s — gasp — a Dynagroove pressing. And it’s not even Bill Porter at the board, it’s his successor, Jim Malloy.

No matter. Bill may have left in 1964, but he left behind an amazing studio that he practically single-handedly turned into one of the best sounding recording venues in the world. This record may say Dynagroove, but it sure doesn’t sound Dynagroove.

And Bill Porter may have left, but his signature sound is all over this record. As we noted in a previous listing: END_OF_DOCUMENT_TOKEN_TO_BE_REPLACED