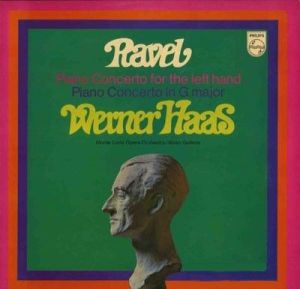 This Philips recording from 1970 on exceptionally quiet Dutch vinyl has SUPERB Super Hot Stamper sound on side one for one of Ravel’s best known piano works, the Piano Concerto in G. Most Philips records are much too thick, dull and opaque to be taken seriously, by us anyway. (In this respect they have many sonic attributes in common with Londons from the ’70s and ’80s.)

Dropping the needle on this pressing, however, was a pleasant surprise. It’s big and spacious on side one, with zero smear on a piano that is both full and clear.

This is a difficult combination to achieve in our experience, and the kind of sound we do not hesitate to praise highly here at Better Records.

To us it sounds right, and when the sound is as right as it is here, the wonderful piano music of Ravel can really work its magic.

Side One — Piano Concerto in G major

A++, with all the lovely qualities mentioned above. The stage is wide, the bottom huge and the whole of the recording both dynamic and exciting. Not 100% as transparent as the best we played, but close — maybe 90%? That’s still awful good in my book!

Side Two — Piano Concerto for the Left Hand

A+ to A++. The piano is big and it goes deep — we love that sound! Some smear on the transients can be heard (this is true for practically every piano recording we play of course), and the orchestral brass has some smear as well compared to our shootout winner, but for the most part the balance of the piano and the orchestra is correct.

Both of these piano pieces are wonderfully inventive and enjoyable. Both belong in any serious music collection.

Gershwin was influenced by French composers of the early twentieth century. In turn Maurice Ravel was impressed with Gershwin’s abilities, commenting, “Personally I find jazz most interesting: the rhythms, the way the melodies are handled, the melodies themselves. I have heard of George Gershwin’s works and I find them intriguing.” The orchestrations in Gershwin’s symphonic works often seem similar to those of Ravel; likewise, Ravel’s two piano concertos evince an influence of Gershwin.

Gershwin asked to study with Ravel. When Ravel heard how much Gershwin earned, Ravel replied with words to the effect of, “You should give me lessons.”

Notes from the Piano Society

The Piano Concerto in G major was a long time in the making. Ravel started thinking about it in 1928 (at his visit to Oxford) after his return from America. He took it up again in 1929, but then broke off to write the Concerto for the left hand, then continued with in 1930, and completed it in 1931. Ravel saw this concerto as being in the spirit of Mozart and Saint-Saëns, light and brilliant and in contrast to those heavier classical concerti which he felt were written “against” rather than “for” the piano.

The concerto observes traditional 3-movement form, albeit with great contrasts of style between movements and indeed within them: the first movement begins with a whipcrack and goes on to include jazz elements reminiscent of Gershwin (whom Ravel had met in America in 1928), as well as an imitation of a musical saw in the trilling of the piano. Of the solo part, Marguerite Long later recalled: “It is a difficult work especially in respect of the second movement where one has no respite. I told Ravel one day how anxious I was, after all the fantasy and brilliant orchestration of the first part, to be able to maintain the cantabile of the melody of the piano alone during such a long slow flowing phrase… ‘That flowing phrase!’ Ravel cried. ‘How I worked over it bar by bar! It nearly killed me!'”

Piano Concerto for the Left Hand

The Piano Concerto for the Left Hand in D major was composed by Maurice Ravel between 1929 and 1930, concurrently with his Piano Concerto in G. It was commissioned by the Austrian pianist, Paul Wittgenstein, who lost his right arm during World War I.

Wittgenstein gave the premiere with Robert Heger and the Vienna Symphony Orchestra on 5 January 1932. Before writing the concerto, Ravel enthusiastically studied the left-hand études of Camille Saint-Saëns. The first French pianist to perform the work was Jacques Février, chosen by the composer himself.

The piece was commissioned by Paul Wittgenstein, a concert pianist who had lost his right arm in the First World War. Although at first Wittgenstein did not take to its jazz-influenced rhythms and harmonies, he grew to like the piece. Ravel’s other concerto, the Piano Concerto in G, is more widely known and played.