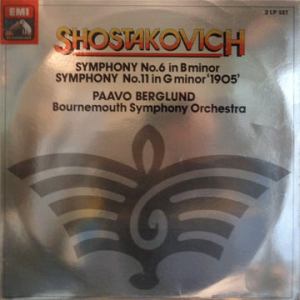 This early EMI UK pressing has the kind of Tubey Magical Midrange that modern records can barely BEGIN to reproduce. Folks, that sound is gone and it sure isn’t showing signs of coming back. If you love hearing INTO a recording, actually being able to “see” the performers, and feeling as if you are sitting in the studio with the band, this is the record for you. It’s what vintage all analog recordings are known for — this sound.

What the Best Sides of Shostakovich’s Symphonies No. 6 and 11 Have to Offer Is Not Hard to Hear

What We’re Listening For on Shostakovich’s Symphonies

Symphony No. 6 In B Minor

Symphony No. 11 In G Minor (continued)

Symphony No. 11 In G Minor (continued)

Wikipedia on Symphony No. 6

The Symphony No. 6 in B minor, Op. 54 by Dmitri Shostakovich was written in 1939, and first performed in Leningrad on 21 November 1939 by the Leningrad Philharmonic Orchestra under Yevgeny Mravinsky.

Symphony No. 6 is in three movements and lasts approximately 30 minutes:

The Sixth Symphony is unusual in structure, beginning with a long and introspective slow movement, followed by two short movements: a scherzo and a “full-blooded and debauched music-hall galop”.

According to music critic Herbert Glass, the “entire [first] movement is based on the cell of a minor third, with a second theme – which follows without transition – the motif of a diminished seventh, with the trill at its close forming the third major ingredient of the movement – the two themes and the trill combined as a sort of super-theme. The composer lays this out as clearly as if he were teaching a music-appreciation class: do listen for it. Chamber music effects abound with, for instance, piccolo or flute, eerily alone or accompanied by the B-flat clarinets. There are walloping climaxes, too, each of which dies away into the gloom. Note, too, the composer’s wonderful spotlighting of the melancholy English horn, a lone figure after the din has evaporated.”

The third movement galop is the movement Shostakovich himself thought was most successful. Music critic Daniel Hathaway noted that “Snare drums ratcheted up the riot of brutal sound in the Scherzo and references to the William Tell Overture and laughing trombones added a hilarious burlesque quality to the finale.” On average, the first movement is 15–20 minutes long, the second movement is 4–6 minutes long, and the third movement is 5–7 minutes

Wikipedia on Symphony No. 11

The Symphony No. 11 in G minor, Op. 103 (subtitled The Year 1905), by Dmitri Shostakovich was written in 1957 and premiered by the USSR Symphony Orchestra under Natan Rakhlin on 30 October 1957. The subtitle of the symphony refers to the events of the Russian Revolution of 1905. However, the music may also reflect the Soviet invasion of Hungary, as the symphony was composed in the immediate aftermath of the events. Shostakovich himself was quoted saying “don’t forget that I wrote the symphony in the aftermath of (the) Hungarian Uprising”. The first performance given outside the Soviet Union took place in London’s Royal Festival Hall on 22 January 1958 when Sir Malcolm Sargent conducted the BBC Symphony Orchestra. The US Premiere was given by Leopold Stokowski and the Houston Symphony on 7 April 1958.

The symphony was conceived as a popular piece and proved an instant success in Russia—his greatest, in fact, since the Leningrad Symphony fifteen years earlier. The work’s popular success, as well as its earning him a Lenin Prize in April 1958, marked the composer’s formal rehabilitation from the Zhdanov Doctrine of 1948.

A month after the composer had received the Lenin Prize, a Central Committee resolution “correcting the errors” of the 1948 decree restored all those affected by it to official favor, blaming their treatment on “J. V. Stalin’s subjective attitude to certain works of art and the very adverse influence exercised on Stalin by Molotov, Malenkov and Beria”.

The symphony has four movements played without break, and lasts approximately one hour.

I. Adagio (The Palace Square)

The first movement reflects the discomforting quietness of Palace Square on the morning of Bloody Sunday. The Adagio incorporates two Russian folk songs, Slushai (“Hearken”), and Arrestant (“The Prisoner”), played by flute and bass respectively, that are associated with famed political figures. Throughout the movement Shostakovich calls for timpani motifs that allude to events to come.

II. Allegro (The 9th of January)

The second movement, referring to the events of Bloody Sunday at the Winter Palace on 22 January 1905 [O.S. 9 January]. Shostakovich bases the movement on two themes from his Ten Choral Poems on Revolutionary Texts, entitled Goy ty, tsar nash, batyushka (“O thou, our Tsar, our father”), and Obnazhite golovy (“Bare your heads”). The first section depicts the petitioners at the protest, in which crowds descended on the Winter Palace to complain about the government’s increased inefficiency, corruption, and harsh ways. This first section is busy and constantly moves forward. It builds to two steep climaxes, then recedes into a deep, frozen calm in the prolonged piccolo and flute melodies, underscored again with distant brass.

Another full orchestra build-up launches into a pounding march, in a burst from the snare drum like gunfire and fugal strings, as the troops descend on the crowd. This breaks out into a section of relentless strings, and trombone and tuba glissandos procure a nauseating sound underneath the troops’ advance on the crowd. Then comes a section of mechanical, heavily repetitive snare drum, bass drum, timpani, and tam-tam solo before the entire percussion sections breaks off at once. Numbness sets in with a section reminiscent of the first movement.

The third movement is a lament on the violence, based on the revolutionary funeral march Vy zhertvoyu pali (“You fell as victims”). Toward the end, there is one more outbreak, where material from the second movement is represented.

The finale serves as a warning and a stance of defiance. Shostakovich uses celesta as a tocsin (in Russian nabat, also the name of a revolutionary magazine) to anticipate the events of 1917. Three pieces are quoted: Besnuytes, tyranny (“Rage, tyrants”), Varshavyanka (“Whirlwind of danger”), and Ogonki (“Sparks”).

The Eleventh is sometimes dubbed “a film score without the film”. Indeed, the musical images have an immediacy and simplicity unusual even for Shostakovich the epic symphonist, and an additional thread is provided by the nine revolutionary songs that appear during the work. Some of these songs date back to the 19th century, others to the year 1905. Shostakovich does not merely quote these songs; he integrates them into the symphonic fabric within the bounds of his compositional style. This use of pseudo-folk material was a marked departure from his usual technique. However, it lent the symphony a strong emphasis on tonality and a generally accessible musical idiom.[5] They were also songs the composer knew well. His family knew and sang them regularly while he was growing up.