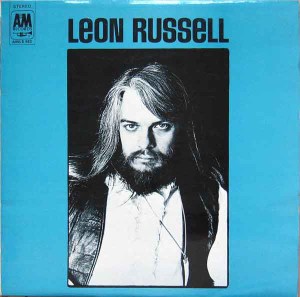 Forget the dubby domestic pressings and whatever dead-as-a-doornail Heavy Vinyl record they’re making these days – if you want to hear the Tubey Magic, size and energy of Leon’s wonderful debut album, a vintage UK pressing like this one is the only way to go.

The best copies of Russell’s debut album have excellent sound, as expected from a record engineered by Glyn Johns in 1970. Surprisingly, a number of UK copies suffered from somewhat dry sound, especially in the vocals. Our best copies are rich and Tubey Magical, which is what these songs need to have in order to sound their best.

The domestic pressings of Leon Russell’s debut that we’d auditioned over the years always seemed flat, dry, and closed-in. We know that sound well; it’s the sound you hear on records that have been made from dubbed tapes (and it’s the hallmark of the modern Heavy Vinyl reissue, truth be told). That sound bores us to tears and had us questioning what we could possibly have seen in the album in the first place. What happened to the glorious sound of early ’70s analog we were expecting to find?

What We’re Listening For on Leon Russell

The list of musicians playing on the album are a Who’s Who of Rock circa 1970. What other album can boast the contributions of half The Beatles, three fifths of The Stones, half of Blind Faith as well as Joe Cocker and some of his Mad Dogs and Englishmen? (You may recognize practically the entire lineup from Clapton’s first solo album here also, an album which is one of my favorites to this very day.)

Leon Russell never quite hit all the right notes the way he did on his eponymous debut.

He never again topped his triptych of “A Song for You,” “Hummingbird,” and “Delta Lady,” nor did his albums contain such fine tracks as “Dixie Lullaby.”

Throughout it all, what comes across is Russell’s idiosyncratic vision, not only in his approach but in his very construction — none of the songs quite play out as expected, turning country, blues, and rock inside out, not only musically but lyrically.

Yes, his voice is a bit of an acquired taste, but it’s only appropriate for a songwriter with enough chutzpah to write songs of his own called “I Put a Spell on You” and “Give Peace a Chance.” And if there ever was a place to acquire a taste for Russell, it’s here.