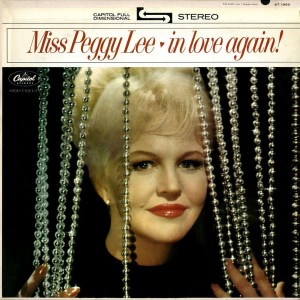 What the Best Sides on In Love Again! Have to Offer is Not Hard to Hear:

What We’re Listening For on In Love Again!

To say, as the unsigned liner notes to Peggy Lee’s LP In Love Again! do, that the album has a theme and that theme is love is to say it has no theme at all, really. Virtually every song sung by a pop singer like Lee is a love song. It might be more accurate to suggest that the album represents a veteran performer taking account of current trends in popular music and bending them to her own viewpoint. That Lee is intent in recasting material becomes clear immediately, as she leads off side one with “A Lot of Livin’ to Do.” The song’s writers, Lee Adams and Charles Strouse, intended it as a parody of rock & roll when they wrote it for their Broadway musical Bye Bye Birdie, in which it was sung by Conrad Birdie, the Elvis Presley stand-in they were making fun of. But Lee takes the song at face value and uses it to start off a side’s worth of uptempo material that also includes “Got That Magic,” the first of three songs she co-wrote, which is nearly a rock & roll number itself, boasting electric guitar and a honking saxophone. Rock isn’t really Lee’s forte, of course, though she keeps up with the beat valiantly. More her speed is her other contribution on the first side, “That’s My Style,” with music by Cy Coleman. Side two is the slow side, and it begins with “I Can’t Stop Loving You.” But unlike Ray Charles, who gave the country song soul, Lee presents it with her usual cool, thus claiming it for her own. Similarly, she doesn’t seem to care that “Unforgettable” is a Nat King Cole signature song; she just renders it with her characteristic precision. The title song, another Lee/Coleman composition, is her best original on the set, and elsewhere she takes account of Latin styles, notably on her cover of Antonio Carlos Jobim’s “How Insensitive” (“Insensatez”). There’s nothing revelatory on In Love Again!, just 12 quality performances from a highly identifiable singer who is not shy about taking other people’s material and re-imagining it or about coming up with her own vehicles.