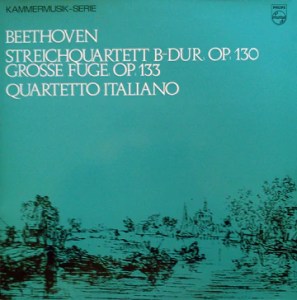 This vintage Philips pressing has the kind of Tubey Magical Midrange that modern records can barely BEGIN to reproduce. Folks, that sound is gone and it sure isn’t showing signs of coming back. If you love hearing INTO a recording, actually being able to “see” the performers, and feeling as if you are sitting in the studio with the band, this is the record for you. It’s what vintage all analog recordings are known for — this sound.

What We’re Listening For on this wonderful Classical release

The String Quartet No. 13 in B♭ major, Op. 130, by Ludwig van Beethoven was completed (in its final form) in November 1826. The number traditionally assigned to it is based on the order of its publication; it is actually Beethoven’s 14th quartet in order of composition. It was premiered (in its original form) in March 1826 by the Schuppanzigh Quartet and dedicated to Nikolai Galitzin on its publication in 1827.

Negative reaction to the work’s final movement at the first performance, and his publisher’s urging, led Beethoven to write a substitute for the final movement, a contradanse much shorter and lighter than the enormous Große Fuge it replaced. This new finale was written between September and November 1826 and is the last complete piece of music Beethoven composed before his death in March 1827. It is marked:

Beethoven never witnessed a performance of the quartet in its final form; it was premiered on 22 April, 1827, nearly a month after his death.

The original finale was published separately under the title Große Fuge as opus 133. Modern performances sometimes follow the composer’s original intentions, leaving out the substitute finale and concluding with the fugue. Robert Simpson argues that Beethoven’s intentions are best served by playing the quartet as a seven-movement work, with the Große Fuge followed by the replacement finale.

Beethoven originally wrote the fugue as the final movement of his String Quartet No. 13, Op. 130. His choice of a fugal form for the last movement was well grounded in tradition: Haydn, Mozart, and Beethoven himself had previously used fugues as final movements of quartets. But in recent years, Beethoven had become increasingly concerned with the challenge of integrating this Baroque form into the Classical structure. “In my student days I wrote dozens of [fugues] … but [imagination] also wishes to exert its privileges … and a new and really poetic element must be introduced into the traditional form,” Beethoven wrote.[9] The resulting movement was a mammoth work, longer than the five other movements of the quartet together.[10] The fugue is dedicated to the Archduke Rudolf of Austria, his student and patron.