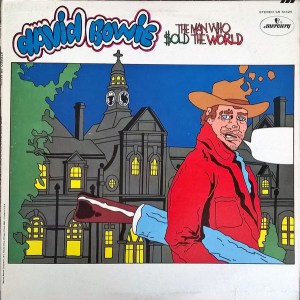 The sound is rich and full, just the way the Brits like it. The heavy compression that both Bowie and Scott favor works its magic at every turn, adding fatness and richness and lovely harmonics to the guitars and the drums.

Not many Bowie albums from his “classic” period sound good on domestic vinyl, nothing I know of before Diamond Dogs with the exception of this album and the occasional copy of Space Oddity. Strangely enough, from then on practically every one of Bowie’s albums sounds best on domestic vinyl, all the way through to Let’s Dance, after which we more or less check out — don’t know those albums well and don’t plan on finding out more.

Ah but here, here we have some truly prime period Bowie, recorded, mastered and pressed with Top Quality sound!

Mick Ronson’s guitars are wonderfully clear. The vocals can get a bit hot on the first track (as is often the case), but by track two the sound has settled in and is rich and smooth, just the way we like it. Very present and lively vocals are a strong point.

Listen to the big bass, richness and Tubey Magic of the third track — that is some Ken Scott studio wizardry at play.

Note that the second track seems to be where Alice Cooper found his “sound.” More power to him I say. You could get away with ripping off Bowie in 1970; nobody bought this album in the states, which is why it’s so damn rare and expensive.

And that is the reason there are so many bootlegs. Practically every copy on ebay is a bootleg.  They sound terrible by the way.

How to Spot the Bootleg Copies, Courtesy of Discogs

This US release is the first release on LP of The Man Who Sold the World. It was only released in two countries – US and Japan (SFX-7345) – with this original cover. The building in the background is the Cane Hill Hospital where David Bowie’s half-brother Terry was a patient.

The album was released in a further three countries on the Mercury label – Germany (David Bowie – The Man Who Sold The World) in a large circular fold-out cover and the United Kingdom and Australia with a picture of David reclining in a dress. This latter cover is the one used on contemporary releases.

The following visual indicators can be used to confirm an original US Mercury LP:
• The matrices in the runout (the space between the label and the grooves) are machine stamped (the counterfeits are hand etched).
• The space between the final lyric line of The Supermen and the cartoon bubble “Oh By Jingo” on the back cover is approximately the height of a line of text, while on the counterfeits the space is notably wider.

There are other differences, though these can be more easily seen and described in a side-by-side comparison.
Rights Society: ASCAP

Over the next three years Bowie would go on to record Hunky Dory (1971), The Rise and Fall of Ziggy Stardust (1972) and Aladdin Sane (1973). Not many bands can produce three records in a row of such staggering artistry, four if you count this one. All belong in any serious music collection, and all of them are very hard to come by with good sound. We sure have a hard time finding them, and we do this for a living.

Even though it contained no hits, The Man Who Sold the World, for most intents and purposes, is the beginning of David Bowie’s classic period. Working with guitarist Mick Ronson and producer Tony Visconti for the first time, Bowie developed a tight, twisted heavy guitar rock that appears simple on the surface but sounds more gnarled upon each listen.