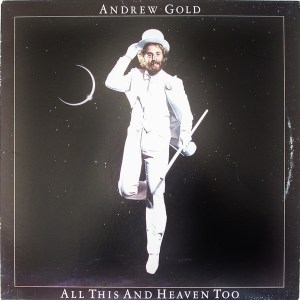 Superb engineering by Greg Ladanyi (Toto 4, The Pretender, El Rayo-X, demo discs one and all). Contains the monster hit Thank You for Being a Friend. AllMusic gives this one 4 1/2 Stars. It’s also the last good album our fab friend made.

Andrew Gold is another talented popster who got little respect from the critics, or the public for that matter. His music has a lot of the same qualities as Buddy Holly’s: simple catchy tunes about love, with clever lyrics and tons of hooks.

If you know the “Asylum Sound” — think of the Tubey Magical Analog of The Eagles first album and you won’t be far off — you can be sure the best copies of All This and Heaven Too have plenty of it. Rarely do we run into recordings from the mid- to late-’70s with richer, fuller sound. The bass on the best copies is always huge and note-like. In the ’80s the very engineer for this record, Greg Ladanyi, would produce solo albums for the likes of Don Henley with no bass. How this came to be I cannot begin to understand, but record after record that we play from that decade are bright and thin like a transistor radio. This accounts for why you see so few of them on the site.

But Andrew Gold’s albums from the later ’70s are amazingly rich and tubey. That sound never went out of style with us. In fact albums with those sonic qualities make up the bulk of our sales, from The Beatles to The Eagles, Pink Floyd to Elton John, Simon and Garfunkel to Graham Nash. In our world the more “modern” something sounds the lower the grade.

Triple Plus! This side is doing it all. It’s incredibly rich, sweet and Tubey Magical with tons of deep punchy bass and wonderfully breathy vocals. This side of this copy was doing something no other side two could do. When the vocals were at their biggest and loudest they were still natural, clear and breathy, never strained or edgy. This is classic Asylum Analog. A copy like this will be very hard to beat.

Gold’s best album is of course his first. It’s also a real Desert Island Disc for me. Unfortunately it is also one for which quiet, clean, good sounding copies are very difficult to find.

I remember the title of the Rolling Stone review for this first album from practically 30 years ago: “Andrew Gold Is Fab.” If you like The Beatles, Badfinger, The Hollies and all the other melodic pop bands from the ’60s (and who doesn’t?), you have to like this guy.

For Heart Like a Wheel we noted: “Pay special attention to Andrew Gold’s Abbey Road-ish guitars heard throughout the album. The mans’ guitars and keyboards are all over this record. If anybody deserves credit besides Linda for the success of HLAW, it’s Andrew Gold.”

In 1975 Linda Ronstadt had her only US No 1 with a revival of “You’re No Good”, previously a hit for Betty Everett and the Swinging Blue Jeans. The record was produced by Peter Asher but it was a tour de force for Gold, who played electric piano and drums as well as the guitar solo.

Gold sang a duet with Ronstadt on a revival of the Everly Brothers’ “When Will I Be Loved”, while Ronstadt encouraged him to make solo records and sang backing vocals on his first hit, “Lonely Boy.” – Spencer Leigh

Thank You for Being a Friend

Looking for My Love

Andrew Gold was part of the outstanding musical scene which developed in Los Angeles in the 1970s and included Linda Ronstadt, the Eagles, Bonnie Raitt and Jackson Browne. Gold, a multi-instrumentalist, played on numerous albums and also had his own hit singles with “Lonely Boy”, “Never Let Her Slip Away” and “Thank You For Being A Friend”. He could have had, and perhaps should have had, more solo success but his voice was probably not distinctive enough. “I know I can sing,” he told me in 2000, “but I also know that I’m not Lennon or Sinatra.”

For part of his adolescence, Gold was educated in the UK. His musical talent was soon appreciated and in the early 1970s he was playing in two Los Angeles bands, Bryndle and the Rangers, both with the guitarist Kenny Edwards. While at Oakwood School in Hollywood, he met Linda Ronstadt, then singing with the Stone Poneys.

Both Edwards and Gold were invited to join the Stone Poneys, and his burgeoning talent was soon recognised. Gold sang and played guitars and keyboards on her big-selling and highly acclaimed solo albums, Heart Like A Wheel (1974), Prisoner In Disguise (1975), Hasten Down The Wind (1976), Living In The USA (1978), Mad Love (1980) and Get Closer (1982).

In 1975 Linda Ronstadt had her only US No 1 with a revival of “You’re No Good”, previously a hit for Betty Everett and the Swinging Blue Jeans. The record was produced by Peter Asher but it was a tour de force for Gold, who played electric piano and drums as well as the guitar solo. Gold sang a duet with Ronstadt on a revival of the Everly Brothers’ “When Will I Be Loved”, while Ronstadt encouraged him to make solo records and sang backing vocals on his first hit, “Lonely Boy”.

There is no doubt that Gold was regarded as a very safe pair of hands and he was invited to play on scores of albums. They included Maria Muldaur (1974), Kate And Anna McGarrigle (1975), Jennifer Warnes’ Shot Through The Heart (1979) and Stephen Bishop’s Careless (1976). He was strongly featured on Art Garfunkel’s album, Breakaway (1975) and provided most of the accompaniment on the stunning No 1 single, “I Only Have Eyes For You.”