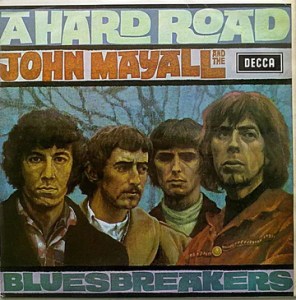 This vintage Decca import pressing has the kind of Tubey Magical Midrange that modern records can barely BEGIN to reproduce. Folks, that sound is gone and it sure isn’t showing signs of coming back. If you love hearing INTO a recording, actually being able to “see” the performers, and feeling as if you are sitting in the studio with the band, this is the record for you. It’s what vintage all analog recordings are known for — this sound.

What We’re Listening For on A Hard Road

Eric Clapton is usually thought of as John Mayall’s most important right-hand man, but the case could also be made for his successor, Peter Green. The future Fleetwood Mac founder leaves a strong stamp on his only album with the Bluesbreakers, singing a few tracks and writing a couple, including the devastating instrumental “Supernatural.” Green’s use of thick sustain on this track clearly pointed the way to his use of guitar riffs with elongated, slithery tones on Fleetwood Mac’s “Albatross” and “Black Magic Woman,” as well as anticipating some aspects of Carlos Santana’s style. Mayall acquits himself fairly well on this mostly original set (with occasional guest horns)… Highlights include the uncharacteristically rambunctious “Leaping Christine” and the cover of Freddie King’s “Someday After a While (You’ll Be Sorry).”