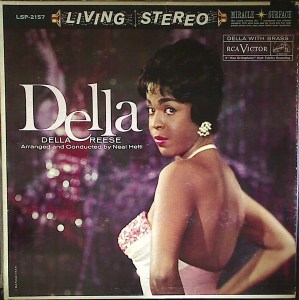 If you’re a fan of vintage female vocals – the kind with no trace of digital reverb – you may get quite a kick out of this one.

This early Living Stereo pressing has the kind of Tubey Magical Midrange that modern records cannot even BEGIN to reproduce. Folks, that sound is gone and it sure isn’t showing signs of coming back. If you love hearing INTO a recording, actually being able to “see” the performers, and feeling as if you are sitting in the studio with the band, this is the record for you. It’s what vintage all analog recordings are known for — this sound.

And The Angels Sing
Baby, Won’t You Please Come Home
I’m Beginning To See The Light
I’ll Get By
Blue Skies
Someday (You’ll Want Me To Want You)

Della Reese was never a hardcore jazz singer. Her specialty was traditional pre-rock pop, and unlike jazz-oriented singers — Sarah Vaughan, Ella Fitzgerald, and Carmen McRae, among many others — she was not improvisation-minded. Therefore, her work must be judged by pop standards instead of jazz standards. Anyone who isn’t a myopic jazz snob realizes that pop standards aren’t necessarily low standards; in fact, traditional pop singers like Frank Sinatra, Jo Stafford, Tony Bennett, and the seminal Bing Crosby have had very high standards. And similarly, Reese brings high pop standards to Della.

Recorded in 1959, this excellent album finds Reese backed by an orchestra that Neal Hefti arranged and conducted. Hefti’s presence doesn’t automatically make Della a jazz session, but he provides tasteful arrangements for a pop singer who has jazz, blues, and gospel influences. …Reese, to her credit, doesn’t even try to emulate Sinatra’s version; instead, she provides a playful interpretation that is rewarding in its own right.