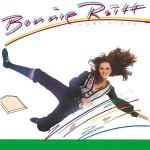 This is a classic case of a record that really starts to work when the levels are up. It’s so free from distortion and phony processing it wants to be played loud, and that’s the level this music works at. It’s the level it was no doubt mixed at, and that mix sounds pretty flat at moderate levels. If you want to hear the real rockin’ Bonnie Raitt you gots to turn it up!

Like a lot of the best recordings from the mid-’70s, the production and recording quality are clean and clear, and we mean that in a good way. There is very little processing to the sound of anything here; drums sound like drums, guitars like guitars, and Bonnie sings without the aid of autotuning –– because she can sing on-key, and beautifully. Her vocals kill on every song. (Her dad had a pretty good set of pipes too.)

The first two she did for Capitol are fine albums in their own right, but she was already out of gas by the time she got accepted by the record buying public and the Grammy Award committee.

That was 1989; this album is from 1975 when she still had her groove on. You may gain a lot of wisdom as you age from thirty-six to fifty, but you don’t gain a lot of rock and roll energy (or any other kind, for that matter).