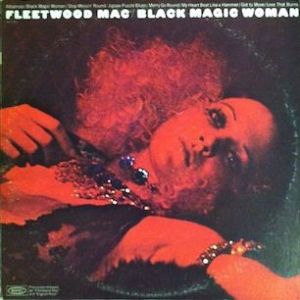 What the amazing sides offer is not hard to hear:

Don’t assume the UK pressings containing this material have better sound. Most of them are dull and opaque, clearly mastered from dub tapes. You have to work very hard to find these songs with good sound, and early pressings such as this one do not come cheap in the stores in this kind of condition.

Not quite. Some of the early Mac’s songs from the British Greatest Hits compilation we have offered in the past are not to be found on Black Magic Woman. Oh Well Parts One and Two spring immediately to mind. That said, with this album and the Brit Greatest Hits you’re in better shape than you would be with any other three LPs I can think of. Two and done? For all practical purposes, yes.

Easily one of the centerpieces of the early Fleetwood Mac canon, “Black Magic Woman” is obviously more well-known as the huge hit single for Santana in 1970. However, this version on its own is indeed striking and far more than just a blueprint. Crossing blues, rock and Caribbean/calypso music, Peter Green created a unique musical synthesis, and the effect is intoxicating.

Fleetwood Mac’s debut LP was a highlight of the late-’60s British blues boom. Green’s always inspired playing, the capable (if erratic) songwriting, and the general panache of the band as a whole placed them leagues above the overcrowded field… The album was an unexpected smash in the U.K., reaching number four on the British charts.

For reasons that no one seems to recall in detail — but for which we can be grateful — when it was time to release a second Fleetwood Mac LP in America, producer Mike Vernon and the band didn’t just send the existing Mr. Wonderful album across the Atlantic — a little fine-tuning and retooling was in order.

The band had just expanded by one member, to a quintet — with the addition of guitarist Danny Kirwan — by the end of 1968, whereas Mr. Wonderful represented them as a four-piece outfit. Additionally, the group had just toured the U.S. for the first time, as a quintet, playing to very enthusiastic audiences, and so there was some point to sending U.S. licensee Epic Records something extra, representing who they were at the start of 1969.

And that became the English Rose album, offering three Kirwan-authored instrumentals, plus the hit U.K. single “Albatross,” and also their previous single, “Black Magic Woman,” which had been a British Top 40 hit (though it was unknown in the U.S., and preceded Santana’s hit recording of it by almost two years).

Half of Mr. Wonderful was still there, including the opener, “Stop Messin’ Round” and “I’ve Lost My Baby,” representing the stronger tracks from that record. Between the paring down of Mr. Wonderful and the addition of the single tracks, English Rose ended up being a stronger album than its predecessor, though without a hit single in America to drive sales and get it exposure, it barely brushed the Top 200 LP listings in the U.S. Strangely enough, despite the overlap with Mr. Wonderful, English Rose was released in England about six months later, probably to help make up for the loss of the group’s contract (due to an oversight) by Blue Horizon.