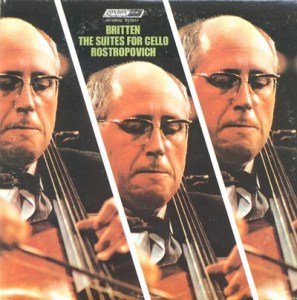 This solo Cello recording on London from 1970 has Super Hot Stamper sound on both sides, with a cello that might not be realistically portrayed, but is certainly portrayed POWERFULLY.

Honestly, we kid you not, the cello occupies all the space between the speakers, which, being about seven feet apart, makes for a cello that’s seven feet wide!

Now if you turn down the volume, you of course get a smaller cello, but the real fun of this recording is to hear the instrument in your room, front and center, with every nuance of its sound reproduced clearly. So we left the volume up.

The cello sound is full, rich and harmonically natural, with only the slightest trace of smear. In other words, it’s correct in every way but its size.

The longer and more intently one listens, the easier it becomes to accept the size of the cello as presented here. It stops being an issue. One finds oneself lost in the music, amazed at the preternatural skill of this man, the most famous and renowned cellist of the late 20th century, a man for whom the work was written no less.

The Cello Suites by Benjamin Britten (opp. 72, 80, and 87) are a series of three compositions for solo cello, dedicated to Mstislav Rostropovich. The suites were the first original solo instrumental music that Britten wrote for and dedicated to Rostropovich, but Britten had earlier composed a cadenza for Joseph Haydn’s Cello Concerto in C major, for Rostropovich, in 1964. Rostropovich gave the first performances of each work, and recorded Suites Nos 1 and 2 commercially.