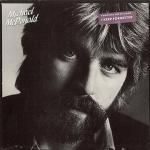 Let us not forget that this is also one of the All Time Great Jeff Porcaro Drum Exhibition Records. His work here is pure genius. Play this album next to Katy Lied: I think you will find the comparison instructive. If That’s What It Takes and Katy Lied are the pinnacle of achievement for Jeff on the drums.

I’m proud to count Michael McDonald among my favorite recording artists. He made this Desert Island Disc and single-handedly turned the Doobie Brothers into a band I could enjoy and even respect.

This is a Must Own if you like the later Doobies and the kind of highly-polished but heartfelt and intelligent pop records that band excelled at in the ’70s.

As the lead singer of the Doobie Brothers from 1975-1980, Michael McDonald’s soulful voice and skilled writing gave the group classics like “Minute by Minute,” “Real Love,” and the perfect “What a Fool Believes.” … 1982’s If That’s What It Takes is McDonald’s first solo effort, and was recorded at the great recording studios like Warner Bros. and Sunset Sound and was co-produced by Ted Templeman and Lenny Waronker.

… The album’s biggest hit, the moody and sleek “I Keep Forgettin’,” continues McDonald’s unflinching look at heartbreak, and it is more R&B-influenced than the previous Doobie Brothers work. The buoyant “I Gotta Try,” co-written by Kenny Loggins, perfectly captures the early-’80s L.A. pop sound. While McDonald’s pop acumen is no surprise, If That’s What It Takes also offers McDonald the chance to do ballads. The poignant and spare “I Can Let Go Now” has some of his best lyrics. “Losin End,” which first appeared on 1976’s Takin’ It to the Streets, gets recast as an even bleaker rumination with a suitably sorrowful solo from Tom Scott. The melodically complex “Believe in It” has McDonald doing some great, offhanded gospel-tinged vocals. This debut juggles tracks of merit and those of less distinction, but the bright spots make this essential.