A few months back Richard Metzger posted on the Dangerous Minds website a story recounting his lifelong search for better sounding pressings of his favorite albums.

The third paragraph evinced a deep understanding of this hobby of ours, as you can see:

Please allow me to state the obvious right here at the outset: Most people WILL NOT GIVE A SHIT about what follows. One out of a hundred maybe, no, make that one out of a thousand. Almost none of you who have read this far will care about this stuff. If you are that one in a thousand person, read on, this was written especially for you. Everyone else, I won’t blame you a bit if you want to bail.

The story of my life! Part One of Richard’s life story can be found here.

After reading Richard’s post, I contacted him and offered to send him a Hot Stamper pressing of a record of his choosing, about which he was of course free to say anything he liked. (This is still America, right?)

That record turned out to be Aja and it seems he was pretty pleased with the copy we sent him.

Here is a link to his article.

I hope to have some comments to add when time permits.

Speaking of Aja, we’ve been playing that one since the day it came out in 1977. We’ve written extensively about the album since we started doing shootouts for it around 2006. Here is the link to some of our Reviews and Commentaries.

If you are interested in a Hot Stamper Steely Dan album, we have some of those too, but probably not Aja, because copies of Aja are getting very hard to find nowadays and the ones we do find with killer sound sell quickly.

The picture below was taken many years ago. That particular shootout involved 16 copies, but finding 16 copies of the album to do a shootout nowadays would take us at least two years, and maybe three. They are not sitting in the bins like they used to be.

However, since we have easily played more than a hundred pressings over the years, closer to two hundred by now I would guess, we know when Aja sounds right and when it doesn’t.  That’s why it was so easy to know how bad this version was when we first played it back in 2007. 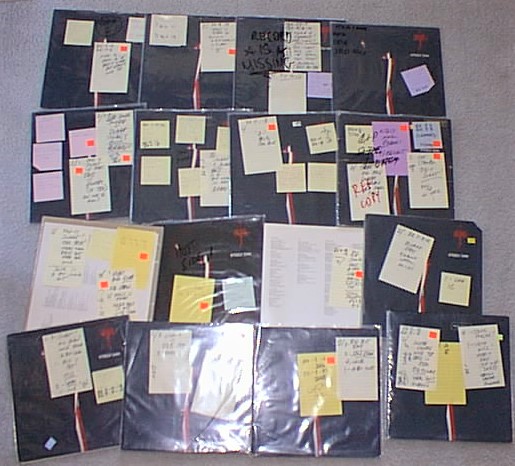