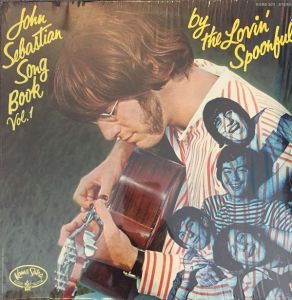 Great sound for some the biggest hits of The Lovin’ Spoonful, a band I wouldn’t have expected to hear sound good on vinyl if I lived to be a hundred, and yet, here it is. This is one of the rare cases where, in our experience, the hits compilation sounds BETTER than the original records. Why? Who knows? We don’t pretend to have all the answers. What we do have (that no one else has, if that’s not too obvious) are the records that back up the claims we make for them.

How they came to be that way is anyone’s guess. All we know for sure is that, judging by the best copies of this album, somebody got hold of some awfully good tapes and somebody mastered them with uncanny skill to what sounds to these ears like near perfection.

Actually, the mastering engineer for this compilation and the Best of from the same year is a person well known to us record collecting audiophiles — the person that ends up with this record can look in the dead wax for his info and the rest of you are welcome to guess — so it’s really no surprise that this compilation sounds as good as the Best of that we rave about.

Some records are just too consistently noisy for us to offer to our audiophile customers no matter how good they sound.

This copy has the kind of sound we look for in a top quality Folky Pop Rock record: immediacy in the vocals (so many copies are veiled and distant); natural tonal balance (most copies are at least slightly brighter or darker than ideal; ones with the right balance are the exception, not the rule); good solid weight (so the bass sounds full and powerful); spaciousness (the best copies have wonderful studio ambience and space); and last but not least, transparency, the quality of being able to see into the studio, where there is plenty of musical information to be revealed in this sophisticated recording.

Here is a more comprehensive breakdown of what we were listening for when evaluating the John Sebastian Songbook, Vol. 1.

With a real Hot Stamper the sound is TOTALLY INVOLVING, and so is the music. You hear the breath in the voices, the pick on the strings of the guitars — these are the things that allow us to suspend our disbelief, to forget it’s a recording we’re listening to and not living, breathing musicians.

Most copies of this album have no extreme highs, which causes the guitar harmonics to be blunted and dull. Without extreme highs the percussion can’t extend up and away from the other elements. Consequently these elements end up fighting for space in the midrange and getting lost in the mix.

Audiophile Quality Sound, Can It Really Be True?

There is very little chance that you have ever heard these songs sound as good as they do on the best pressings, on any medium. CD compilations can be very good; they gain an edge because there is no need to make dubs of the masters in order to compile the tracks. And there may very well be CD versions of this material that sound much better than most of the vinyl editions sitting in the bins.

We’ve been buying Lovin’ Spoonful albums for twenty years or more and the vast majority of the ones that aren’t beat to death sound crude, smeary and midrangy. Some are dry and transistory (ugh), some are muddy and opaque (ditto), and if you have these albums you have records that fall into those two categories.

We are happy to finally be able to offer our customers Lovin’ Spoonful sound to please their audiophile tastes. It may have taken more than twenty years, but it just goes to show that if you play enough records over a long enough period of time you will eventually stumble on to the pressing that has the sound you’ve been searching for. No rocket science, just money, time and dedication.

Mix magazine interviewed the man back in 2001 about his engineering of some of the later Lovin’ Spoonful sessions.

Was it hard to switch back and forth between, say, the Lovin’ Spoonful and a big pop session?

No, I can’t say it was. One might be a little more challenging than another. You go into the studio with a 70-piece orchestra and you’re doing it live — that was a helluva challenge. You couldn’t spend two hours getting a drum sound, obviously. You had to get it right away. But then a group like the Lovin’ Spoonful was challenging in its own way. You’re working to really capture the sound of the group, and that’s not always easy. I really liked them. John Sebastian was really great to work with. They got a little crazy sometimes, but they were a lot of fun. To cut a record like “Summer in the City,” and watch it go up to Number One and sit there for weeks — that was a ball; it was really thrilling.

Do You Believe In Magic?
You Didn’t Have To Be So Nice
She Is Still A Mystery
Younger Generation
Coconut Grove
Six O’Clock

This is a Lovin’ Spoonful compilation, released in late 1968 or early 1969 [Wikipedia says 1970], containing 11 tracks, five of them Spoonful hits — “Do You Believe in Magic,” “You Didn’t Have to Be So Nice,” “She Is Still a Mystery,” “Six O’Clock,” and “Nashville Cats” — plus six other tracks culled from the four Spoonful albums featuring John Sebastian.