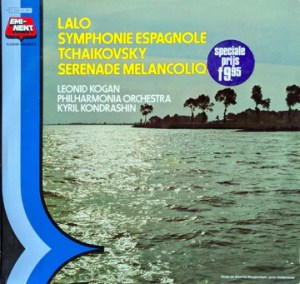 My notes for side one read:

The Lalo on side two is clear and spacious but could use a bit more warmth. The Tchaikovsky piece that finishes out the side is richer and smoother than the Lalo. Listen for it!

What We’re Listening For on Symphonie Espagnole and Serenade Melancolique

The Symphonie Espagnole in D minor, Op. 21, is a work for violin and orchestra by Édouard Lalo. The work was written in 1874 for violinist Pablo Sarasate, and premiered in Paris on February 7, 1875.

Although called a “Spanish Symphony” (see also Sinfonia Concertante), it is considered a violin concerto by musicians today. The piece has Spanish motifs throughout, and launched a period when Spanish-themed music came into vogue. (Georges Bizet’s opera Carmen premiered a month after the Symphonie Espagnole.)

The Symphonie Espagnole is one of Lalo’s two most often played works, the other being his Cello Concerto in D minor.

The Symphonie Espagnole had some influence on the genesis of Tchaikovsky’s Violin Concerto in D major. In March 1878, Tchaikovsky was staying at Nadezhda von Meck’s estate at Clarens, Switzerland, while recovering from the breakdown of his disastrous marriage and his subsequent suicide attempt. His favourite pupil (and allegedly his lover), the violinist Losif Kotek, shortly arrived from Berlin with a lot of new music for violin. His collection included the Symphonie Espagnole, which he and Tchaikovsky played through to great delight. This gave Tchaikovsky the idea of writing a violin concerto, and he immediately set aside his current work on a piano sonata and started on the concerto on 17 March. With Kotek’s technical help, the concerto was finished by 11 April.