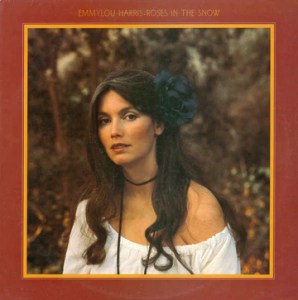 Both sides have wonderful clarity and transparency. Emmylou’s vocals are breathy with lots of texture, the stringed instruments have the proper amount of pluck and twang, and the bass is Right On The Money. Yee-haw!

This original Warner Bros. pressing has the kind of Tubey Magical Midrange that modern records can barely BEGIN to reproduce. Folks, that sound is gone and it sure isn’t showing signs of coming back. If you love hearing INTO a recording, actually being able to “see” the performers, and feeling as if you are sitting in the studio with the band, this is the record for you. It’s what vintage all analog recordings are known for — this sound.

I’ll Take This Over Alison Krauss On MoFi Any Day

The sound is INCREDIBLY rich and sweet, with none of the transistory grain so common to WB albums from this era. It blows the doors off of a record like the MFSL Alison Krauss. In fact, this record is the perfect example of what’s wrong with that pressing. Listen to the quality of the voices and acoustic instruments on this album, then compare them to your Krauss MOFI. I am hoping that you will hear that there is a world of difference between the two, because there is.

If you like the sound of the best Warner Brothers recordings from about the same timeframe — think Ry Cooder’s Jazz and Rickie Lee Jones’ debut to name a couple — you’ll find much to like about the sound here. It’s incredibly detailed but not at all phony — just what you need to appreciate the sound of the various stringed instruments, including acoustic guitars, electric guitars, archtop guitars, mandolins, fiddles, autoharp and more.

What We’re Listening For on Roses in the Snow

And The Music Is Wonderful

The song Jordan is superb. How can you go wrong with Johnny Cash on background vocals? Play Wayfaring Stranger and Darkest Hour Is Just Before Dawn for some of the best sound — talk about three-dimensionality!

The album features an all-star line-up of guests, including Cash, Willie Nelson, Dolly Parton, Linda Ronstadt, Ricky Skaggs and more. I’m not qualified to say that this is the one country album that you must own, but it’s a darn good one!

Combining acoustic bluegrass with traditional Appalachian melodies (and tossing one contemporary tune, Paul Simon’s “The Boxer,” into the mix), Roses in the Snow ranks among Emmylou Harris’ riskiest — and most satisfying — gambits.