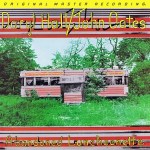 Those of you who have had the misfortune to play the MoFi LP know that they absolutely ruined this album. They boosted the hell out of the top end, the last thing in the world this recording needed.

Actually, that’s probably not true. People who collect MoFi records probably like the kind of phony sound found on the MoFi of this title.

To the extent that a MoFi collector is not happy with the sound, my guess is he would more than likely place the blame on the recording, not the mastering.

Of course, since such a collector would never lower himself to buy a plain old domestic copy of the record, he would have no way of knowing that it trounces his so-called audiophile pressing. If your stereo likes that MoFi sound in this day and age, you shouldn’t be buying records. You should be buying new equipment which hopefully will allow you to recognize bad records when you play them.

You have to wonder what would possess an audiophile record label like MoFi to think that they could improve upon an original that sounds as good as this one does. There is nothing that needs to be “fixed.”

I remember a conversation I had with Steve Hoffman one time about a similar recording. His comment to me was that sometimes when you thread up a tape and hit play, it just sounds so right and so good that you know that almost anything you do to it will probably end up making it worse.

When MoFi threaded up the tape for this album, they should have realized that their phony EQ would be nothing short of disastrous for this music. It was audiophile hubris to even attempt an improvement.

The one way that Mobile Fidelity could have actually served the audiophile community would have been to cut the record correctly, in this case identically to the copy that we are selling here, and simply have pressed it on quiet vinyl, eliminating the need to buy a noisy domestic original or a lackluster later reissue.

But they didn’t go in that direction. More’s the pity.