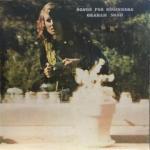 WHOA! We’ve paired up two FOUR PLUS sides to create this stunning 2-pack with mindblowing Demo Quality sound for the whole album. These A++++ sides will show you just how amazing it can sound: super full-bodied, rich, warm and natural.

Please note that we award this very special grade so rarely that we don’t even have a graphic to represent it in our sonic grade box. The scale usually only goes to three pluses, but these two sides went up to four!

This is an incredible recording, and on a copy like this the sound is truly stunning. When you hear Chicago here you will not believe how CINEMATIC the sound is! It’s everything we love about ANALOG, and then some.

Most of the credit must go to the team of recording engineers, led here by the esteemed Bill Halverson, the man behind all of the Crosby Stills Nash and Young albums. Nash was clearly influenced by his work with his gifted bandmates, proving with this album that he can hold his own with the best of the best. Some songs (We Can Change The World, Be Yourself) are grandly scaled productions with the kind of studio polish that would make Supertramp envious. For me, a big speaker guy with a penchant for giving the old volume knob an extra click or two, it just doesn’t get any better than this.

The recording is of course superb throughout, in the best tradition of Crosby Stills and Nash’s classic early albums: transparent, smooth and sweet vocals, with loads of midrange magic ; deep punchy bass (wait until you hear Better Days!); lovely extension on the top to capture the shimmer of the cymbals and harmonic trails of the acoustic guitars; with the whole balanced superbly by one of our all-time heroes, Glyn Johns.

This wonderful album, recorded with help from an all-star crew including David Crosby, Neil Young, Dave Mason, and Rita Coolidge, may not be the best solo record to come out of the CSNY orbit (Neil Young has it beat), but it is the most charming and genial. Like Graham Nash’s “Marakesh Express” and “Teach Your Children,” it inevitably brings a smile to anyone who hears it.

From the soaring “I Used to Be a King” (almost a distant, mature, altered point-of-view sequel to “King Midas in Reverse”) through the gossamer “Simple Man” to the wah-wah-laden “Military Madness,” the record is filled with gorgeous melodies, flawless singing, and lyrical complexities that hold up decades later. “Man in the Mirror” is almost Nash’s answer to Young’s “Nowadays Clancy Can’t Even Sing,” even containing similar tempo changes; only “Chicago,” with its belated telling of one version of the tale of the 1968 Democratic National Convention, seems dated.