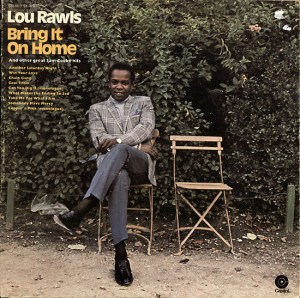 This vintage Capitol pressing has the kind of Tubey Magical Midrange that modern records rarely even BEGIN to reproduce. Folks, that sound is gone and it sure isn’t showing signs of coming back. If you love hearing INTO a recording, actually being able to “see” the performers, and feeling as if you are sitting in the studio with Lou and the band, this is the record for you. It’s what vintage all analog recordings are known for — this sound.

What the best sides of Bring It On Home have to offer is not hard to hear:

What We’re Listening For on Bring It On Home

As we exit the month of December 2016 and move into January 2017, we again remember the enormous contributions that Lou Rawls and Sam Cooke made to popular music internationally and the strange coincidences that dominated their lives.

It was a strange phenomenon, especially when one considers that they were the best of friends.

It all began when they grew up as childhood friends in Chicago, Illinois. Rawls was born there on December 1, 1933, while Cooke moved there from his birthplace in Mississippi, with his parents as a two-year old in the year that Rawls was born. Both men sang as children in the hand-clapping spirit-filled churches of their respective parents, and as a result, had very deep gospel backgrounds.

The similarity and closeness in their upbringing continued through high school. As classmates, they rehearsed gospel songs together and later performed at churches and auditoriums across the country with the Pilgrim Travelers and Soul Stirrers gospel groups. Their voices were, however, miles apart, with Rawls emitting a deep husky baritone and Cooke, a smooth crystalline high-tenor.

Cooke in particular, began to attract legions of female fans to his concerts, and in short order was becoming something like a sex symbol as he gave stirring renditions of Nearer To Thee, Be With Me Jesus, and Touch The Hem Of His Garment.

Rawls, in the meantime, portrayed himself as a preacher of sorts in his early performances but was more of the philosophical type. His later recordings reflected this: One Life To Live; What’s The Matter With The World, Has The World Gone Mad; If I Coulda Woulda Shoulda.

With a voice that was beyond the ordinary, Cooke was encouraged to get into secular music as it offered greater financial rewards. Cautiously optimistic, he made the move, doing his first set of secular recordings under the name Dale Cooke so as not to offend his gospel followers.

Both men got into secular music just about the same time in the late 1950s. But just before that, a serious motor vehicle accident nearly ended their careers and their lives. They were travelling in the same motor vehicle on a tour of the south with the Pilgrim Travellers when the incident occurred. One passenger was killed, Cooke was slightly injured, and Rawls was pronounced dead by a doctor on the way to the hospital. Luckily, Rawls had slipped into a coma, which lasted five and a half days. He suffered memory loss and didn’t completely recover for a year. Rawls’ recording of One Life To Live, some years later, seems to echo his thoughts about the accident, while his first hit, Love Is A Hurting Thing, reveals the haunting side effects of a love affair. Similarly, Cooke’s first hit, You Send Me, touched on the topic as he sang:

“At first I thought it was infatuation

But wooh, it lasted so long.”

Two years before Cooke’s death on December 11, 1964, he recorded in duet with Rawls, the everlastingly popular Bring It On Home To Me. They were at their best as they sang:

“If you ever change your mind

About leaving, leaving me behind

Baby bring it to me, bring your sweet loving

Bring it on home to me.”