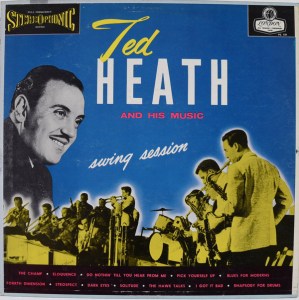 Unlike some of the American big band leaders who were well past their prime by the advent of the LP era, Heath is able to play with all the energy and verve required for this music. He really does swing in high stereo.

Ted Heath was a giant in the world of Big Band and everybody who was anybody knew it.

This original London Stereo pressing has the kind of Tubey Magical Midrange that modern records rarely even BEGIN to reproduce. Folks, that sound is gone and it sure isn’t showing signs of coming back. If you love hearing INTO a recording, actually being able to “see” the performers, and feeling as if you are sitting live in the audience, this is the record for you. It’s what vintage all analog recordings are known for — this sound.

What the best sides of Swing Session have to offer is not hard to hear:

What We’re Listening For on Ted Heath Swing Session

More of an audiophile’s review, but this was recorded in 1959 in England according to my research and the sound is open and airy with great separation of instruments and very much alive. The band is tight and the music is energetic. Good LP to show off your vinyl equipment with some British swing done well from back in the day.