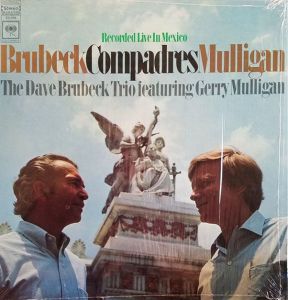 If you haven’t heard one of our killer Gerry Mulligan vintage Columbia pressings, with the fullness of its lower midrange bringing out all the magic of the man’s remarkably rich baritone, this is your chance.

And if too much baritone sax is not your thing, this may be just the right record for you, with Brubeck taking half the leads.

As is the case with most live albums, the sound of the crowd tells you a lot about the recording, and on this copy the crowd sounded exceptionally clear and natural. Many live albums have crowds that are either too bright, or too loud between tracks, both of which can be very off-putting. When the crowd is recorded and mixed right — again, these are pros from Columbia Records who really know their jazz — you feel as if you are immersed right there with them in the audience.

This vintage Columbia 360 stereo pressing has the kind of Tubey Magical Midrange that modern records cannot even BEGIN to reproduce. Folks, that sound is gone and it sure isn’t showing any sign of coming back. If you love hearing INTO a recording, actually being able to “see” the performers, and feeling as if you are sitting in the audience at the live show, this is the record for you. It’s what Live Jazz Recordings are known for — this sound.

What the best sides of this Classic Live Jazz Album have to offer is clear for all to hear:

This album is fairly common in mono, but we found the sound of the mono we played seriously wanting. It’s dramatically smaller, more recessed and more lifeless than even the worst of the stereo pressings we played.

This fine LP was the debut of Brubeck’s new Quartet, a group featuring baritonist Gerry Mulligan, bassist Jack Six and drummer Alan Dawson. Recorded live in Mexico, the album (unlike the previous Bravo! Brubeck which mostly stuck to traditional folk melodies) has three originals apiece from Brubeck and Mulligan, although the most memorable pieces are the two standards “Adios, Mariquita Linda” and “Amapola.” This enjoyable set showed that for Brubeck there was life after Paul Desmond.