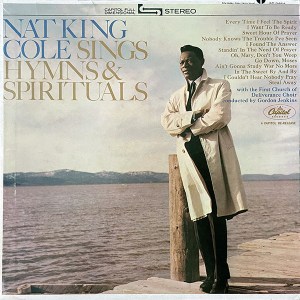 The sound is big, open, rich and full. The highs are extended and silky sweet. The bass is tight and punchy. And this copy gives you more life and energy than most, by a long shot. Very few records out there give you the kind of realistic, lifelike sound you get from this pressing, particularly on side one.

We want to give a special shoutout here to conductor/arranger Gordon Jenkins, who also handled the same duties on Nilsson’s Must Own classic A Little Touch Of Schmillson in The Night.

Oh, Mary, Don’t You Weep
Go Down, Moses
Nobody Knows The Trouble I’ve Seen
In The Sweet By And By
I Couldn’t Hear Nobody Pray
Steal Away

Naturally, having long ago given up on Heavy Vinyl LPs by DCC and others of their persuasion, these days we are in a much better position to devote our resources to playing every Nat King Cole album on every pressing we can get our hands on, trying to figure out what are the copies — from what era, on what label, with what stampers, cut by whom, stereo or mono, import or domestic — that potentially have the Hot Stamper sound, the very Raison d’être of our business.

We have to play each and every one of the records we’ve cleaned for our shootout anyway, whether we think it’s potentially the best pressing or not. There is no other way to do it. Right Stamper, Wrong Sound is an undeniable reality in the world of records. It’s not unheard of for the same stampers to win a shootout, do moderately well on another copy and then come in dead last on a third.