Reviews and Commentaries for Elvis Costello 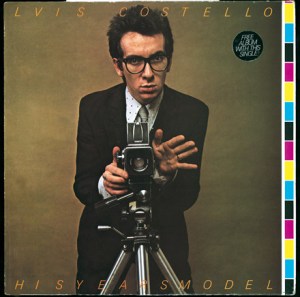 PUMP IT UP! This British Import Radar LP has TWO AMAZING SIDES that brilliantly and powerfully convey the energy of this hard rockin’ music.

The overall sound is punchy, lively, and dynamic with plenty of tight, note-like bass. This is key to the best copies.

A correct bottom end is absolutely CRITICAL for this album. Like Trust and Armed Forces, there’s a TON of low-end on this record; regrettably, most copies suffer from either a lack of bass or a lack of bass definition. I can’t tell you how much you’re missing when the bass isn’t right on this album. (Or if you have the typical bass-shy audiophile speaker, yuck.)

It’s without a doubt the single most important aspect of the sound on this album. When the bass is right, everything falls into place, and the music comes powerfully to life. When the bass is lacking or ill-defined, the music seems labored; the moment-to-moment rhythmic changes in the songs blur together, and the band just doesn’t swing the way it’s supposed to.

Big Rock Records always make for tough shootouts. Their everything-but-the-kitchen-sink approach to recording make it difficult to translate so much sound to disc. vinyl or otherwise. Everything has to be tuned up and on the money before we can even hope to get the record sounding right. (Careful VTA adjustment could not be more critical in this respect.)

Domestic Elvis Costello pressings don’t usually do all that much for us. Boosted highs, poor bass definition and copious amounts of grit and grain — ’70s Columbia at their best, what else is new? The first album and Spike are the only Elvis records I know of that sound good on domestic vinyl. Forget the rest.

If you love Elvis Costello as much as we do around here, we suggest you do yourself a favor and trash your domestic LPs — you need a British copy to even get in the ballpark, and that’s far from a guarantee of good sound. Elvis is “Still the King,” but you would never know it without the right pressing — like this one.

After releasing My Aim Is True, Costello assembled a backing band called the Attractions, which were considerably tougher and wilder than Clover, who played on his debut. The Attractions were a rock & roll band, which gives This Year’s Model a reckless, careening feel. It’s nervous, amphetamine-fueled, nearly paranoid music — the group sounds like they’re spinning out of control as soon as they crash in on the brief opener, “No Action,” and they never get completely back on track, even on the slower numbers.

Costello and the Attractions speed through This Year’s Model at a blinding pace, which gives his songs — which were already meaner than the set on My Aim Is True — a nastier edge. “Lipstick Vogue,” “Pump It Up,” and “(I Don’t Want to Go To) Chelsea” are all underscored with sexual menace, while “Night Rally” touches on a bizarre fascination with fascism that would blossom on his next album, Armed Forces.

Of course, the songs on This Year’s Model are typically catchy and help the vicious sentiments sink into your skin, but the most remarkable thing about the album is the sound — Costello and the Attractions never rocked this hard, or this vengefully, ever again.