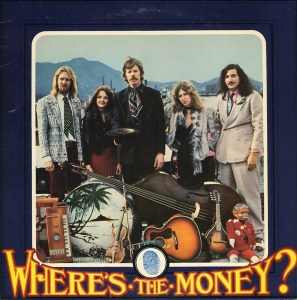 Both sides are rich, real and musical like no other Dan Hicks record you have ever heard.

The female singers’ voices are so clear, breathy and sweet on this copy, we were a bit taken aback. On a Dan Hicks record? That just never happens.

My music is kind of a blending. We have acoustic instruments. It starts out with kind of a folk music sound, and we add a jazz beat and solos and singing. We have the two girls that sing, and jazz violin, and all that, so it’s kind of light in nature, it’s not loud. And, it’s sort of, in a way, kinda carefree. Most of the songs are, I wouldn’t say funny, but kinda maybe a little humorous.

We all like jazz, so we like to play in a jazzy way, with a swing sound you know, so I call it “folk swing”. There are a lot of original tunes that I’ve been writing through the years, so that has its personal touch on it.

Dan before a gig in 2007 at the Riverwalk Center in Breckenridge, CO.

I Feel Like Singing
Coast to Coast
News from Up the Street
Where’s the Money?
Caught in the Rain
Shorty Falls in Love

By Hook or by Crook
Reelin’ Down
The Buzzard Was Their Friend
Traffic Jam
Is This My Happy Home?
Dig a Little Deeper