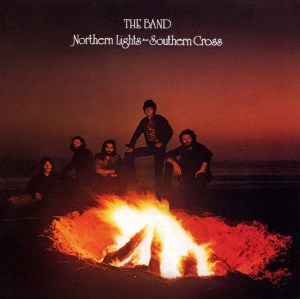 Thankfully both sides here are rich and full-bodied. This pressing is not nearly as dry and flat as the vast majority of pressings we run across. Both sides have a nicely extended top end to go along with the weighty bottom. The guitars and keyboards are Tubey Magical as well, a quality we we focused on, and one that we believe is essential if the album is to sound its best.

This is the UNDISCOVERED GEM in the Band catalog. Allmusic is right on the money when they call this the best Band album since their self-titled second release. I positively LOVE this music, having practically worn out my copy soon after the album was released in 1975.

Yes, every track is good, something that one cannot say about any other Band release after their classic sophomore effort. What makes the album a Must Own is the song It Makes No Difference. It’s a strong contender for the Best Band Ballad ever written (and takes the prize in my book).

Northern Lights – Southern Cross and the first two releases are the only consistently good albums in The Band catalog (not counting the live Rock of Ages). All three belong in any serious pop music collection, and all three are hard as hell to find with good sound.

What We’re Listening For on Northern Lights

The first studio album of Band originals in four years, in many respects Northern Lights-Southern Cross was viewed as a comeback. It also can be seen as a swan song. The album was the Band’s finest since their self-titled sophomore effort. Totaling eight songs in all, on this album the Band explores new timbres, utilizing for the first time 24 tracks and what was (then) new synthesizer technology. “Acadian Driftwood” stands out as one of Robertson’s finest compositions, the equal to anything else the Band ever recorded.