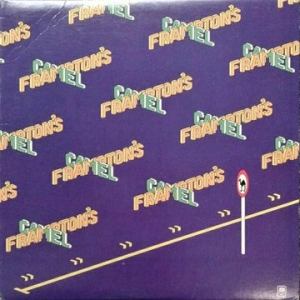 For our shootout for Frampton’s Camel we had at our disposal a variety of pressings that had the potential for Hot Stamper sound, imports and domestics. We cleaned them carefully, then unplugged everything in the house we could, warmed up the system, Talisman’d it, found the right VTA for our Triplanar arm (by ear of course) and proceeded to spend the next hour or so playing copy after copy on side one, after which we repeated the process for side two.

This approach is simplicity itself. First, you go deep into the sound. There you find a critically important passage in the music, one which most copies struggle — or fail — to reproduce as well as the best. Now, with the hard-won knowledge of precisely what to
listen for, you are perfectly positioned to critique any and all pressings that come your way.

What We’re Listening For on Frampton’s Camel

Named after Frampton’s touring band at the time, Frampton’s Camel has a harder-rocking feel than its predecessor Wind of Change, with Mick Gallagher’s percussive electric piano and organ taking a prominent position in the mix and Frampton getting a harder sound from his electric guitars (though his acoustic playing is so lush and lyrical that it dominates the album here and there in its quiet way).

The sound on this recording lays out the formula that Frampton would take to mega-success three years later with the release of Frampton Comes Alive. The songs are all first-rate or close to it — included here is the original studio version of the group composition “Do You Feel Like We Do,” a quicker-tempo, extended (albeit less majestic) version of which appeared on the latter album and became a staple of classic-rock radio, but the Frampton-composed “I Got My Eyes on You” and “Don’t Fade Away” and the Frampton-Gallagher “All Night Long” are also compelling examples of ’70s hard rock at its commercial best. This album also includes a nice cover of Stevie Wonder’s “I Believe (When I Fall in Love With You It Will Be Forever),” the power ballad “Lines on My Face,” the rollicking “White Sugar,” and Frampton’s gorgeously lyrical, all acoustic “Just the Time of the Year.” As on Wind of Change, Frampton’s use of dynamics and mix of acoustic and electric guitars keeps the music from becoming one-dimensional.