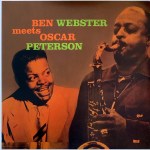 This is a Speakers Corner 180g LP. Years ago we wrote:

“Superb music and sound! This one gets a Top recommendation. This recording captures an intimate Webster session. Ben is at his best in this sort of setting. (He’s at his worst when called upon to “battle” with a gang of loud, frantic exhibitionists.)”

I doubt we would like it as much now as we did then, but if you can get one for cheap, and can stand the typical faults of most Heavy Vinyl pressings being made these days, we say go for it.

The sensitive, alert and propulsive Peterson Trio frames his stories and statements handsomely, and contributes many notable statements of its own. Pianist Peterson, inspired perhaps by Ben, is in a fine, funky frame of mind (his Kansas City heritage.)

The artists take a bunch of strong, standard songs and personalize them — to say the least. With wonderful humor, Ben can take a sophisticated show tune like This Can’t Be Love (Rodgers and Hart) or Ray Noble’s romantic The Touch of Your Lips and turn it into an earthy finger-poppin’ affair. Or he can paint a picture of profound sadness in his tender, moody When Your Lover Has Gone, or that one-time Sinatra soliloquy, In the Wee Small Hours of the Morning.