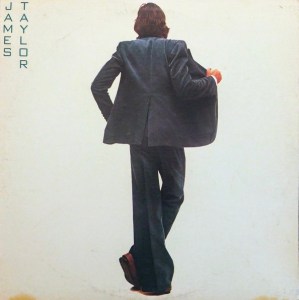 Both of these sides are rich, smooth, yet transparent and high-rez. The vocals are breathy, and again, that is not something we heard nearly enough of in our shootout.

And no hardness. This is key. And the best tonal balance, which is also key.

The critics have never had much love for In The Pocket, but I’ve always felt just the opposite — it’s one of my favorites of the JT canon, an absolute joy from first track to last. As a James Taylor fan I bought a copy as soon as it came out and proceeded to play it practically to death. At the time Rolling Stone magazine gave it a scathingly negative review, accusing Taylor of selling out for making a carefully-produced, sophisticated Soulful Pop Album. Plenty have derisively labeled it “slick”, but to my ear the material is very strong, with all the heart of his earlier albums. Glossy production values and a cast of the L.A. assembled multitudes is hardly cause to dismiss the emotional power of these songs.

As anyone who has spent any time at all on this site knows, we are no snobs when it comes to popular music, extending our tastes to even quite radio-friendly pop. We’re the audiophiles that admit to liking Bread and Sergio Mendes; you can’t get much more radio-friendly than that.

One of the top guys at Warners, Lee Herschberg recorded, mixed and mastered this album as well as Gorilla, Taylor’s previous release. You’ll also find Herschberg’s name in the credits of many of the best Ry Cooder, Doobie Brothers, Gordon Lightfoot and Frank Sinatra albums, titles we know to have excellent sound on the best copies — not to mention an album most audiophiles know all too well, Rickie Lee Jones’ debut. His pop and rock engineering credits run for pages. Won the Grammy for Strangers in the Night even.

What We’re Listening For on In The Pocket

Bobby Womack’s “Woman’s Gotta Have It” was the album’s only cover, and elsewhere Taylor took on a surprisingly rough set of issues in his typically gentle style, including “A Junkie’s Lament” and “Money Machine.” There were also reflections on being a “Family Man” even if, due to his peripatetic touring life, “Daddy’s All Gone.”

Guest stars included Art Garfunkel, who harmonized on “Captain Jim’s Drunken Dream,” and Stevie Wonder, who co-wrote and played harmonica on “Don’t Be Sad ‘Cause Your Sun Is Down.”

In the Pocket is singer-songwriter James Taylor’s seventh studio album, and his last to be released under Warner Bros. Records before signing with Columbia.

One of his most memorable recordings, In the Pocket found Taylor working in the studio with many colleagues and friends, mainly Art Garfunkel (who duetted with him on “A Junkie’s Lament” and also contributed vocals on “Captain Jim’s Drunken Dream”), Carly Simon (Taylor’s wife, who harmonized with him on “Shower the People”), Stevie Wonder (who wrote with Taylor the song “Don’t Be Sad ‘Cause Your Sun Is Down”, a song on which he also played the harmonica) and also David Crosby, Linda Ronstadt and Bonnie Raitt, among others.

The result of the sessions, which took place between late 1975 and early ’76, was a melodic album, one of his most diverse and polished, highlighted with the single “Shower the People”, which through the years became a Taylor standard and concert favorite.