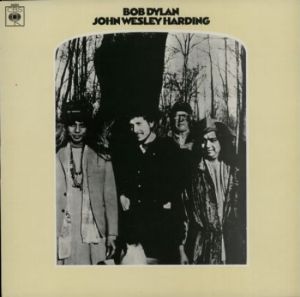 The trick to the best sound on John Wesley Harding is to find a copy that achieves the right balance between Dylan’s vocal and his harmonica.

His vocal should be rich, smooth and somewhat reserved. In the other area of the midrange, Dylan prefers a lively harmonica sound, which means it will typically be somewhat “hot” relative to his voice and the other instruments.

If the frequency balance is shifted up even a very small amount on your pressing or in your system, the sound of the harmonica will be, at least to some degree, edgy, bright and unpleasant.

When we sit down to play a stack of six or eight or ten copies of the album, we fairly  quickly find out what the “right” mix is. It’s the mix where everything is balanced, including the two elements that are the most difficult to balance, the vocals and the harmonica.

The voice should be full-bodied and rich, and it must — must — sound right for a recording of country-tinged music recorded by Columbia in 1967. It is not Brothers in Arms, and it is definitely not supposed to sound like 1985. In all the shootouts we do, the one thing we know is that the sound must be appropriate for the music and the recording era.

(As a rule the reissues from the ’70s are too thin and bright, perhaps equalized in an attempt to bring out more presence in Dylan’s vocal, but of course this approach will surely ruin everything, which it does, and which also explains why you will never see one for sale on our site.)

Our top Hot Stamper pressings will have the two main elements properly balanced with each other, along with all the other instruments in the mix of course. If your system is highly resolving and tonally correct, simply keep adjusting your VTA until you hear the the most correct midrange reproduction, both high and low. Everything else should fall into line.

This may not be a perfect record or a Demo Disc, but you’ll have a very hard time finding a copy that presents the music as well as this one does.

The Dylan Catalog Is Tough

Believe us, John Wesley Harding is one of the tougher nuts to crack in the Dylan canon. Most pressings are a veiled, smeary nightmare. The harmonica sounds noticeably squawky and unpleasant on the bulk of the copies we’ve played over the years. You really have to work to find a copy with the warmth, smoothness and correct tonality to get Dylan’s voice to sound right.

What We’re Listening For on John Wesley Harding

John Wesley Harding
As I Went Out One Morning
I Dreamed I Saw St. Augustine
All Along the Watchtower
The Ballad of Frankie Lee and Judas Priest
Drifter’s Escape

Bob Dylan returned from exile with John Wesley Harding, a quiet, country-tinged album that split dramatically from his previous three.

A calm, reflective album, John Wesley Harding strips away all of the wilder tendencies of Dylan’s rock albums — even the then-unreleased Basement Tapes he made the previous year — but it isn’t a return to his folk roots. If anything, the album is his first serious foray into country, but only a handful of songs, such as “I’ll Be Your Baby Tonight,” are straight country songs.

Instead, John Wesley Harding is informed by the rustic sound of country, as well as many rural myths…

The music is simple, direct, and melodic, providing a touchstone for the country-rock revolution that swept through rock in the late ’60s.

This recording sounds best this way:

Which simply means that the early 360 label domestic stereo pressings win the shootouts, in this case without exception.