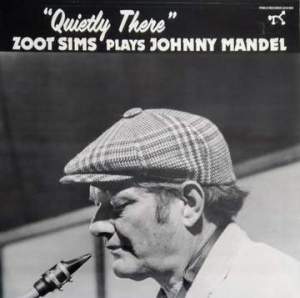 This is one of the best Zoot Sims records. He plays beautifully. This melodic, smooth material is what he excels at. His breathy saxophone style will remind you of Coleman Hawkins and Ben Webster. This recording captures that sound perfectly.

The other Must-Own Zoot Sims record is Passion Flower, also on Pablo. If you see one, grab it. Amazing audiophile quality sound.

Note the length of the tunes on this album. The first side has two 7+ minute long explorations and on side two 2 songs clock in at 6 minutes and the ballad Emily at more than 9 minutes. Cinnamon & Cloves is probably my favorite track on the album. Zoot plays samba as well as Stan Getz — he’s just not as famous for it.

This vintage Pablo pressing has the kind of Tubey Magical Midrange that modern records can barely BEGIN to reproduce. Folks, that sound is gone and it sure isn’t showing signs of coming back. If you love hearing INTO a recording, actually being able to “see” the performers, and feeling as if you are sitting in the studio with the band, this is the record for you. It’s what vintage all analog recordings are known for — this sound.

What We’re Listening For On Quietly There

Rissy
A Time For Love
Cinnamon And Cloves
Low Life

Norman Granz’s idea to match Zoot Sims’ lyrical, swinging tenor sax with Johnny Mandel’s equally arresting compositions was a masterful one. Sims’ tart, alternately lush and furious solos were wonderfully spotlighted on such tunes as “Cinnamon and Cloves,” “Emily” and “Zoot.” The six-tune session… also contains effective piano solos from Mike Wofford. The date’s tour-de-force was its final selection, the wonderful “Low Life,” which Sims probed, illuminated and ultimately redefined via his solo.