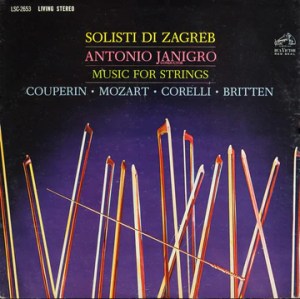 This vintage Shaded Dog pressing has the kind of Tubey Magical Midrange that modern records can barely BEGIN to reproduce. Folks, that sound is gone and it sure isn’t showing signs of coming back. If you love hearing INTO a recording, actually being able to “see” the performers, and feeling as if you are sitting in the studio with the band, this is the record for you. It’s what vintage all analog recordings are known for — this sound.

What We’re Listening For On Music For Strings

Concerto Grosso Op. 6, No 4 For Concertino And Orchestra

Born in Milan, he began studying piano when he was six and cello when he was eight. Initially taught by Giovanni Berti, Janigro enrolled in the Verdi Conservatory of Milan, where he was instructed by Gilberto Crepax. By 1934 Janigro was studying under Diran Alexanian and Pablo Casals at the École Normale in Paris. He graduated from the school in 1934 and began performing solo and in recitals with Dinu Lipatti, Paul Badura-Skoda and Alfredo Rossi.

An unfortunately timed vacation in Yugoslavia left Janigro stranded in that country for the duration of World War II. He became a professor of cello and chamber music at the Zagreb Conservatory, where his influence developed modern cello playing in Yugoslavia. He also performed as part of the Maček-Šulek-Janigro Trio. At war’s end Janigro travelled throughout South America and the Far East as a soloist. In 1949, he started his career as a conductor. In 1959, he was Fritz Reiner’s soloist, along with Milton Preves and John Weicher, in a renowned Chicago Symphony Orchestra recording of Strauss’s Don Quixote.

Janigro was a highly regarded conductor who led a symphony orchestra for Radio Zagreb and guest-conducted throughout Europe. The chamber orchestra I Solisti di Zagreb was created by Janigro and Dragutin Hrdjok in 1954 and was led by Janigro until he left the ensemble in 1968.