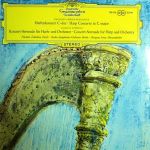 About ten years ago [twenty by now] a Heavy Vinyl version of this album was remastered and pressed by Speakers Corner, part of their disastrous foray into the DG catalog.

This title was decent, the Beethoven Violin Concerto was okay, as was one of the Tchaikovsky Symphonies with Mravinsky (#5), but the rest were just plain awful, offering disgracefully bad sound.

Funny, I don’t recall reading any bad reviews of these albums at the time.

Oh, that’s right, these Heavy Vinyl records never get bad reviews, no matter how lifeless, opaque and unpleasant they might sound.

Except from us of course. We were writing about them back in the day and trying to sell just the better ones.

We long ago gave up on that effort as so few are really very good when you get right down to it.