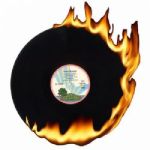 95% of my record collection are now hot stampers. The other 5% are albums of my youth I am hanging on to waiting for a future shootout. I have no heavy vinyl.

A friend of mine got a 180g Analogue Productions copy of Amos Lee for me as a gift. When I first played it on my system, it sounded clear (no surface noise) but the sound was off (more digital than analog).

I imaged it playing in a reference room of a high end audio store and people sitting commenting how good it sounds. As the record played something was just not right. It sounded overly engineered – if that’s possible.

I pulled out a Bob Dylan (2/2) and listened; then another cut of Amos Lee; then a (3/3) Neil Young. The heavy vinyl just did not sound natural to me.

I now have had a listening experience for myself that confirms all the comments you make on heavy vinyl.

Thanks Tom for Hot Stampers!

Mike,Thanks for your letter, glad to hear that you hear what we hear!

You carried out your own little record experiment, and discovered the dirty little secret of the Heavy Vinyl pressing: they don’t sound right, at least not up against a real record.

We’ve carried out a few of our own, and you can find a bunch of them here:

You also no doubt improved your critical listening skills, and the better they get, the worse modern records sound. We have written a fair bit about that as well.

With better critical listening skills, you have two options: do your own shootouts, or let us do them for you. There is no other way to find high quality pressings of the music you love.

Modern records tend to be small, veiled and recessed, and they rarely image well. But the most important quality they lack is transparency. Almost without exception they are opaque. They resist our efforts to hear into the music and get lost in it.

We don’t like that sound, and like it less with each passing day, although we certainly used to put up with it back when we were selling what we considered to be the better Heavy Vinyl pressings from the likes of DCC, Speakers Corner, Cisco and even some Classic Records.

Now when we play the vinyl those companies produced they either bore us to tears or frustrate us with their veiled, vague, lifeless, ambience-challenged presentation.

It was sometime in 2007 when we turned a corner. The remastered Blue on Rhino Heavy Vinyl came out and was such a mediocrity that we asked ourselves “Why are we bothering?” That was all she wrote.