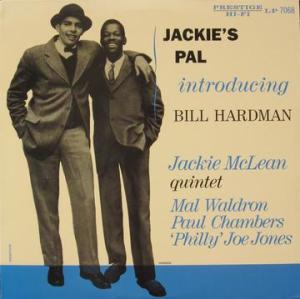 What the best sides of Jackie’s Pal have to offer is not hard to hear:

What We’re Listening For on Jackie’s Pal

This reissue is spacious, open, transparent, rich and sweet. It’s yet another remarkable disc from the Golden Age of Vacuum Tube Recording Technology, with the added benefit of mastering using the more modern cutting equipment of the ’70s and ’80s. We are of course here referring to the good modern mastering of 30+ years ago, not the dubious modern mastering of today.

The combination of old and new works wonders on this title as you will surely hear for yourself on these superb sides.

This leads me to think that most of the natural, full-bodied, lively, clear, rich sound of the album is on the tape, and that all one has to do to get that vintage sound on to a record is simply to thread up the tape on the right machine and hit play. The fact that practically nobody seems to be able to make a record nowadays that sounds this good tells me that I’m wrong to think that such an approach would work.

Sublues
Steeplechase
It Could Happen To You

… this is one of the few examples of Bill Hardman’s recorded trumpet work in circulation (in fact, this was his “official” recording debut). I caught Bill live on 4 occasions, and each time he was in the company of more heralded trumpet players, over each of whom he was able to assert his mastery (including Freddy Hubbard!). Rarely does his name surface in discussions of Art Blakey’s trumpet stars (Clifford Brown, Donald Byrd, Kenny Dorham, Lee Morgan, Freddy Hubbard, Wynton Marsalis, Terence Blanchard), even though he put in extensive tours of duty with the Jazz Messengers on no fewer than three occasions.

He lacked the expansive lyricism and passionate sound of Clifford Brown, but no one could execute complex melodic lines with the speed and precision of Bill. He was a human “bebop machine,” a player who could improvise for hours on a single chord and not run out of ideas…

The first track is an up-tempo blues on which Bill submits 16 dazzling, pyrotechnical choruses–the first five played unaccompanied! That’s a feat I haven’t heard from Diz, Clifford, or Wynton. All Bill needed was a better press agent–or more sponsors like Jackie Mclean.