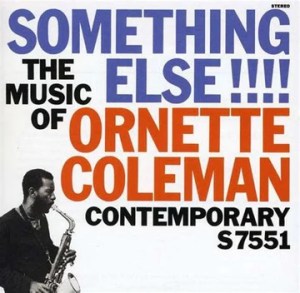 For us audiophiles the sound is shockingly good. If you’re looking to demonstrate just how good 1958 All Tube Analog sound can be, this killer copy will do the trick.

This IS the sound of Tubey Magic. No recordings will ever be made like this again, and no CD will ever capture what is in the grooves of this record. Of course there is a CD of this album, but those of us in possession of a working turntable and a good collection of vintage vinyl could care less.

What the Best Sides of Something Else! Have to Offer Is Not Hard to Hear

What We’re Listening For on Something Else!

The Disguise
Angel Voice
Alpha
When Will The Blues Leave?
The Sphinx

This 1958 debut recording by the Ornette Coleman Quintet, which featured Coleman on his trademark white plastic alto, Don Cherry on trumpet, Billy Higgins on drums, Walter Norris on piano, and Don Payne on bass, shook up the jazz world — particularly those musicians and critics who had entered the hard bop era with such verve and were busy using the blues as a way of creating vast solo spaces inside tight and short melody lines. Something Else!!!! is anathema to that entire idea, and must have sounded like it came from outer space at the time. First, Coleman’s interest was in pitch, not “being in tune.” His use of pitch could take him all over — and outside of — a composition, as it does on “Invisible,” which begins in D flat. The intervals are standard, but the melodic component of the tune — despite its hard bop tempo — is, for the most part, free.

But what is most compelling is evident in abundance here and on the next two tunes, “The Blessing” and “Jayne”: a revitalization of the blues as it expressed itself in jazz. Coleman refurbished the blues framework, threaded it through his jazz without getting rid of its folk-like, simplistic milieu. In other words, the groove Coleman was getting here was a people’s groove that only confounded intellectuals at the time. Coleman restored blues to their “classic” beginnings in African music and unhooked their harmonies. Whether the key was D flat, A, G, whatever, Coleman revisited the 17- and 25-bar blues. There are normal signatures, however, such as “Chippie” in F and in eight-bar form, and “The Disguise” is in D, but in a strange 13-bar form where the first and the last change places, altering the talking-like voice inherent in the melodic line.

But the most important thing about Something Else! was that, in its angular, almost totally oppositional way, it swung and still does; like a finger-poppin’ daddy on a Saturday night, this record swings from the rafters of the human heart with the most unusually gifted, emotional, and lyrical line since Bill Evans first hit the scene.