More of The Kinks 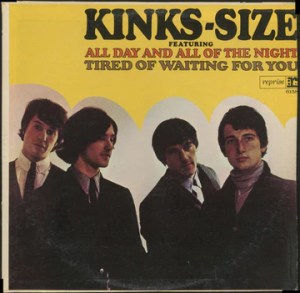 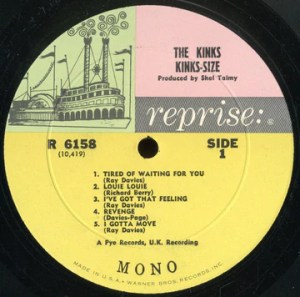 This vintage Reprise Mono pressing has the kind of Tubey Magical Midrange that modern records can barely BEGIN to reproduce. Folks, that sound is gone and it sure isn’t showing signs of coming back. If you love hearing INTO a recording, actually being able to “see” the performers, and feeling as if you are sitting in the studio with the band, this is the record for you. It’s what vintage all analog recordings are known for — this sound.

What We’re Listening For On Kinks-Size

Say it’s early 1965, you’re an American record company executive who’s just seen two new singles by one of those British rock & roll bands on your label shoot up the charts, and there’s no album to go with them; what do you do? Well, if your company was Reprise Records and the singles were “All Day and All of the Night” and “Tired of Waiting for You” by the Kinks, then what you did was take five songs off of the band’s recent British singles and EPs, two cuts (“I’m a Lover Not a Fighter,” “Revenge”) that had been dropped from the U.S. version of the group’s debut album, and one (“Come on Now”) off of their second U.K. LP, throw them and the two hits together on a 12″ disc, come up with a pretty cool name, and voila — you had Kinks Size. What makes this record more enjoyable than the band’s U.K. albums of the same era is that it was made up largely of singles, albeit many of them failed ones, but still all efforts at luring in millions of listeners 150 seconds or so at a time. The American label essentially distilled the best parts of the group’s work in England, thus giving albums like Kinks Size a distinct advantage. From the raw, slurred “Louie Louie” to the pounding rave-up of “Come on Now,” this record rocks, showing off the better sides of the group’s R&B output and early, formative, Beatles-influenced experiments as well. It may be a pastiche, but it’s also more fun than their accompanying U.K. long-players of the era, and it had no equivalent in England for many years, though most of the tracks have since surfaced on expanded versions of the band’s first two albums.