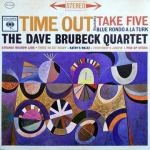 This copy blew our minds — nothing could touch it. The cymbals ring in an exceedingly natural way, Desmond’s sax was dramatically more breathy and intimate, Brubeck played with more energy and clarity, and the whole of the ensemble was so clearly “in the room” that the music was as real and as palpable as it would have been had I been standing in the studio with the four of them in 1959.

If this had been any other original record — Kind of Blue for instance — it’s very unlikely we would have bothered trying to sell a copy with surfaces such as these.

Ah, but that’s cheating: Kind of Blue doesn’t sound its best on the original label; we actually [usually] prefer the Red Label Columbia pressings. [We have since found originals and 360s that sound every bit as good as our best Red Label pressings, with different strengths and weaknesses, of course, but White Hot nonetheless. You can read more about the album here.]

Some Thoughts on Tubes in Audio