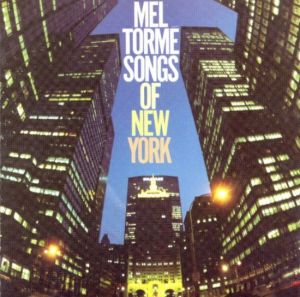 Need a refresher course in Tubey Magic after playing too many modern recordings or remasterings? These Atlantic pressings are overflowing with it. Rich, smooth, sweet, full of ambience, dead-on correct tonality — everything that we listen for in a great record is here.

This vintage stereo pressing has the kind of Midrange Magic that modern records barely begin to reproduce. Folks, that sound is gone and it ain’t coming back. If you love hearing INTO a recording, actually being able to “see” the performers, and feeling as if you are sitting in the studio with Mel, this is the record for you. It’s what vintage Analog recordings are known for — this sound.

What We’re Listening For On Songs Of New York

This thematic recording, with songs all relating to New York City, has vocalist Mel Tormé singing in fine fashion. Some of the familiar numbers are swingy, some stringy, but all are done with the heartfelt passion of a man who has lived in the Big Apple and has many tales to tell.

Among some of the favorites are “Autumn in New York” with its ever poignant and heartbreaking lyric, the jumping “Let Me Off Uptown,” a classic rendition of “Harlem Nocturne,” and the obligatory “New York, New York.” These sessions, reissued from Atlantic label recordings of 1963, have a disclaimer regarding the transfer from analog to digital, in that quality may be lost in spots. Don’t let that dissuade you, as any dropouts are minimal. These are well done and worthwhile offerings from Tormé and friends.